Sunbathing in the garden.

When I took this photo my camera wasn’t aimed at the butterfly though, I had spent ten minutes aiming it in the direction of the big spider curled up in the bottom corner of the photo.

Eeek, right? (Sorry to you arachnophobes, maybe you should stop reading now 😉 )

This guy is a Wolf Spider and, unfortunately, we have plenty of them living in the garden. They live in burrows, so digging a hole always brings the chance of an unexpected attack. I think that is all the more reason for more of those raised garden beds!

They love a bit of sun, often seen soaking up some rays in the mouth of their burrows. They can be quite hard to get close to, your shadow or the vibrations from your steps sees them dashing back down their hole to safety. This is good. I don’t want them thinking they can scare me off by standing up to me, although they definitely could.

Wolf spiders have excellent eyesight and aren’t wait-in-the-web kind of spiders, they will hunt down their prey.* 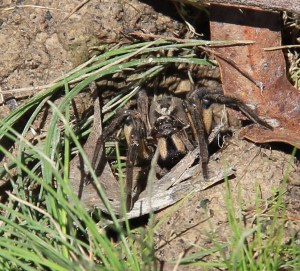 He was watching me… and freaking me out.

Now we come to the big problem I have.

Unfortunately his (or hers, but I’ll go with his) burrow is right where I need to dig the level for a new garden bed that is in the shed awaiting assembly.

He is pretty big, as you can see in comparison with the butterfly, and I have seen him stomping about his front garden of an evening without being wary of me at all.

Just for those of you who haven’t already run screaming away because of the horribleness of the spider, any spider, here is some video from a person who is more patient and far braver than me. Once my spider started getting a bit active I was happy to wander off and take some pictures of things that were less scary… and hairy.. 😉

*Some years ago the Man was doing a late afternoon car repair that ran into the evening. He was lying out on the driveway underneath the car and I was holding a torch for him. Every now and again we could hear scuttling in the gravel near us and, shining the torch around, we could see three of these guys, big ones, hunting the critters attracted to the light. Terrifying.

As you can imagine there was never a car put back together as quickly as that one….