One of the things I love about driving around is seeing the amusing things people have left about the place to amuse us.

Here are some of the things I have managed to snap through the (smeary) car window as we are driving past;

A group of Ned Kellys standing lookout in a paddock.

And this sign at the end of a driveway. Only Australians will see the funny side of this*

Do Kerry and Billy have a neighbour called Tony?

*Kirribilli House is the name of the official Sydney residence of the Prime Minister of Australia, and is a piece of prime real estate situated right on Sydney Harbour.

At the beginning of European settlement of Australia was mainly populated by means of the transportation system. That means most levels of society were filled with people who had begun their residence in Australia in chains.

Life was pretty terrible as a convict and often those who escaped lived out in the bush and took to robbery under arms (highway robbery) and stealing from homesteads. Often they were helped by sympathetic ex-convicts who supplied information or food.

Bushrangers like Captain Starlight, Ned Kelly, Bold Jack Donohoe, and, the star of todays post, Captain Melville, had something of a celebrity status, with their exploits dramatically recounted in the papers.

Captain Melville was touted as something of a gentleman, chivalrous to women and reportedly returning money to poor settlers on occasion.

This article from 1947, 90 years after his death, tells the story of the night he called on the startled McKinnon family for a night of musical entertainment. Reports like this no doubt helped cement the romanticized reputation of bushrangers that still carries through to today.

Francis McCallum, (1822-1857) arrived in Van Diemens Land in September 1838. By 1851 he had become a bushranger known as Captain Melville whose range covered a large part of western Victoria.

Wedderburn, where we are staying for the next few days, was a rich goldfield at that time, and attracted many people hoping to make their fortune. Captain Melville was no exception and had a hideout on nearby Mt. Kooyoora known as Captain Melville’s Caves.

The ‘caves’ are not really caves as such, the mountain is populated by huge granite boulders, the ones the we see have been weathered out over the years. Captain Melville’s Lookout and his namesake caves are the ones most exposed. The wide view from the Lookout is spectacular, and I could imagine someone sitting up there watching for gold escorts. 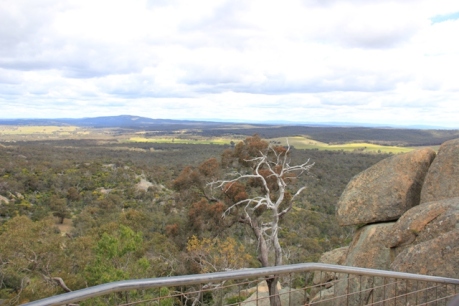 Small part of the view from Melville Lookout.

We climbed down the path to the caves, the upper is supposedly where he kept his horse, sleeping in the lower. He must have had a thin or extremely agile horse if it could get through the tumbled boulders to the upper cave without getting stuck though!

The upper and lower caves are really just one space with a big step up in the middle. There have been sturdy steps built for us to walk between the two although one of the lowest steps had been smashed by a rock falling from above. Not the best thing for number 1’s confidence. He had taken one step inside, looked up at the tonnes of perilously balanced boulders over our heads and said a bad word.

We walked through and I wondered how much time Captain Melville had actually spent in here. It was cold and damp and dark. A settlers hut down the hill would have been far more pleasant. This photo makes them look far more airy, bright and inviting that they really were.

Off to the right was a track that headed down, winding steeply through the boulders and making the kids very happy with another excuse to climb and jump around. We followed it for a while until the Man and I realized that by the time we made it to the bottom the car would still be at the top. We turned and climbed back up, kids moaning all the way.

Our trip in to the caves had been an amusing one, we had arrived by default. We were aiming to go there but had taken a back road and done a bit of exploring first. As usual we had stopped for lizards and kangaroos and interesting sights on the way, bemoaning the lack of signage and not finding any bitumen until we actually parked. Then we realized we had come in what was effectively the back door and that it was well signposted from the other side of the hill….

Oh well, going the back way meant the photo opportunity below; a farmer moving his sheep between paddocks. Sheep walk very slowly unless being chased, and he had two dogs to do all the hard legwork for him, but he still drove his car.

Our furry family member Jack has been along with us on this trip and has been loving it. Faithful readers will know that cold-blooded Jack has trouble tearing herself away from the fireplace, so this trip to some warmer parts of Australia have been right up her alley.

Now we are back in chilly Victoria Jack is not as happy about travelling as she could be. The annex, where her doghouse lives, is not equipped with a fireplace and on a cold morning she puts on a show of being a dogsicle instead of her normal slightly singed self.

When we were recharging our batteries in Wentworth with the solar panels it was easy to see where the best place to put them was. Wherever the dog was lying was clearly the most sunny place, and so the most effective position for the panels to be positioned.

As you can see by the photo below poor Jack was cooked out there in the sun, panting, and almost combusting in the dry grass. No matter what we did to make the shady spot where the rest of us were sitting look enticing to her she would not budge other than to come over for a quick pat until the sun went down.

I am not a ‘dressing your dog in clothes’ kind of person but I can see that Jack might love me a lot more if I got her a warm jumper for these cold mornings. Tough luck dog, you live in Victoria, you’re going to have to get used to it!

Not sunny and warm anymore. Bugger.

This is one of the songs that we will be listening to in the car today, Rain, by Dragon from back in 1983. You Aussies (and New Zealanders, since Dragon are adopted Aussies) are probably going to be saying “Awwww, Dragon? I loved them!”

This song is very appropriate as we have now gone from the lovely sunny days of outback New South Wales to the cold and rainy days of Victoria. Damn. We can tell that we are on our winding way home now and we are not happy about it.

I took this picture the other day when we left Broken Hill. This is Jack the dog doing it hard on the back seat.

As you can see she had her two favourite people to snuggle up to, and soft flannie jackets to lay her head on.

Through the holiday she has had a steady diet of leftovers; bakery crusts, toast, bbq scraps and salad (yep, the dog loves salad). Each time we have had to leave her locked in the caravan when we went shopping (and it was too hot to leave her in the car) she got a big chew stick and a handful of biscuits to placate her.

Being a dog on holiday is not really a bad life, is it? 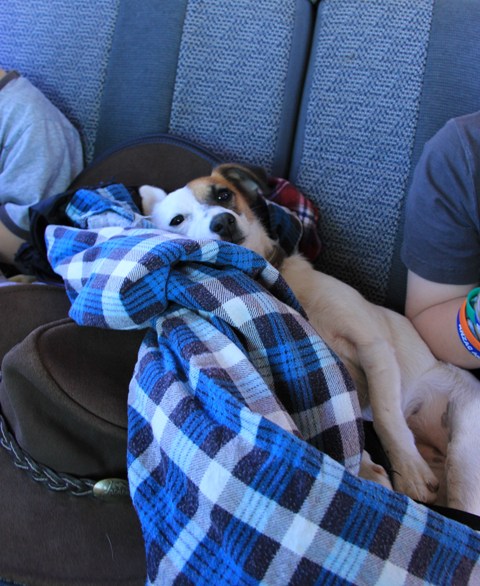 We have finally left Broken Hill and headed off down south again. We are staying in Wentworth, although the caravan park was so packed that not only did we get the very last site, we have no power or water. Oh well, our caravan is self-sufficient (we even have a toilet and shower inside and a shower outside) and has solar panels and a battery. The only problem is that my laptop won’t last too long plugged into the 12 volt!

Back through the cartoon fly line again!

I am searching for an unattended power point to recharge, but until then I will have to share this quick apology, I will reply to all of your comments soon! Sorry!

The only benefit is that we are staying right on the Darling river and the weather is perfect. The downside is the reason the park was full. The town in in full swing for the country music festival. Bands are touring around all the local towns playing, and there are happy music lovers everywhere. The Man doesn’t mind a bit of country, the kids and I hate it.

We got hot chips for lunch yesterday and wandered down to the river to eat only to find a band in full voice. Both number 1 and 2 stopped at the edge of the grass in horror, and one of them was heard to mutter, hands firmly clapped over his ears, “what is that racket?”.

Even though the Man was in possession of the chips and had found a nice shady spot to sit, the kids and I just walked away, off down the river trying to get out of earshot…..

Thank goodness the riverside stage is just on the edge of earshot, although the ocassional boat goes past, blaring a bit of country. Annoyingly the limit for boats in this stretch of river is 4km hr. Or knots, I’m not sure. No matter what it is, it is too bloody slow when the music is loud I tell you! 🙂

I thought I would share this sign the Man noticed on the door of the local pub.

Need time to yourself?

Leave your husband with us!

We’ll look after him for you!

You just pay for his drinks!

We got a good laugh out of this but there might not be too much money left for shopping afterwards! 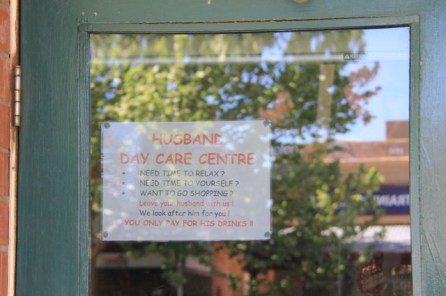 That could cost quite a bit!