On Sunday I had three options, I could either do the housework, the washing or work on my blog posts for the coming week. Both the washing and housework were sorely in need of attention and I could do with catching up on some blog drafts. Decisions, decisions…

I did one load of washing and hung it on the line, so it looked as though I had actually done something, then went out to my thinking spot on the front steps so no-one in the house would notice that I was really doing nothing at all.

While I was sitting there I thought I would take some pictures to share with you. Then I could convince myself I was working on a new post for Monday. Two things off my list and barely lifting a finger. Nice.

My thinking spot has a nice view of the mountains and is where I can look at the garden and the critters that live there, so first I took a photo of my little bird bath in the lavender hedge, it is very cute and always has a bird on it so it seems like quite a popular place to be. 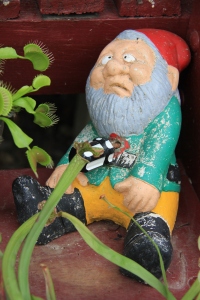 The Steps of Death...

Next was the Gnome. He is not the ‘happy gardener’ type of gnome. Our Gnome has spent years on the verge of death, slumped in a corner of the steps with a rusty screwdriver plunged deep into his chest, blood trickling from the wound. This is how garden gnomes should be.

Also on the steps are some members of my carnivorous plant collection, pitcher plants and venus flytraps I have moved out there in order to fatten up, while thinning the wasp population. When I thought about this (killer plants and a nearly dead Gnome) I realized that ‘the steps of death’ is probably something that a feng shui expert would change immediately.

Hmmm… should I get some happy flowers in brightly coloured pots to correct this? Nah… I prefer the steps of death.

That started me thinking. Maybe I should start writing an anti-feng shui book. It could be laid out as a walk through my house, with the chapters entitled;

Bloody hell, I came out here to slack off and do nothing and I ended up writing a whole post. I am ‘doing something’ and failing in my original lazy intention of ‘doing nothing’. Curse you thinking spot! Next time maybe I should just go back to bed.