If you hate your job, you should just quit. Extreme measures. 1936.

What an unusual way to hasten the end. If you hate your job you should really do something a little less drastic about it. I wonder what the pilot was thinking as this guy dove out?

I wonder if it was his own shop or if he had spent ages just dreaming about smashing through the roof onto his surprised boss?

I am sure we have all imagined ways to tell a crappy boss to shove their job, but diving through the roof from 3,500 ft? Really? I think he could have thought that through a little better.

Either way, it would appear he missed the grocery altogether and only managed to ruin a nearby bungalow and nearly take out some innocent bystanders. Those poor women are never going to feel safe indoors again! 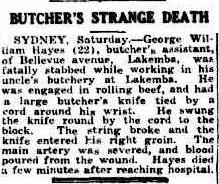 Poor George Hayes would have been wishing he had a blunter knife shortly before he expired. I wonder if the string was normal practice in those days? Having an extremely sharp knife swinging around your legs at work sounds like a recipe for disaster to me.

Poor bugger. We have all had hiccups and they can vary from amusing to moderately annoying but this version is pretty extreme. After finding this article I had a bit of a search and found other people who had died of the same cause. I can imagine how an extreme case of the hics might make breathing difficult but to die from it….yikes…

Poor Archibald Anderson. Not the sort of end you want to have to explain at the Pearly Gates. Shark attack, explosion, poisoning, these all have a certain something, but death caused by false tooth plate? Not cool.

Another uncool death was caused by a florin lying on the ground. Two men dived for it and collided, causing the death of one of them later in the day. In 1911 wages were considerably different to those today so I looked up the value of a florin to see if these guys were scrabbling for something worth the effort.

Apparently a florin was worth around 24 pence (or two shillings or a tenth of a pound) and you can pick one up on eBay now for $20 to $30. I am sure that if Ryan and Mc Grath had no money it was well worth picking up, but not really worth your life. Poor Ryan, Mc Grath must have had a very hard head indeed.

While horses have quite wide nostrils I am sure that it is not their normal practice to admit a snake. It must have been a quite small, and quite surprised, reptile.

I’m sure we have all suffered the discomfort of a fly up the nose at some stage, can you imagine the shock of the poor pony finding something considerably larger travelling up its shnozz?

Fences and necks. Do not combine.

I found this article and wondered what on earth was going on with this woman. One time could be an accident but to have been found with her head jammed in the same way sometime earlier makes me wonder about her state of mind. Once I read this one it wasn’t hard to find the other article along the same lines. Not sure that a fence is a method may people would take to end their life, and really, I don’t think it would be too reliable a method either. Mostly when newspapers stated that a fence was involved in the death of a person, a gun was also attending the scene. I know that you need to be careful when you pass through a fence with a gun but judging by the volume of articles regarding unexpectedly discharged guns, fences and dead farmers I wonder if anybody else knew?

In a semi-related story, a woman was found one night recently impaled on the spikes of a fence surrounding St Francis’ church in Melbourne. There were many comments in the media on the terribleness of the spikes and how such things shouldn’t be allowed. The bravery of the woman and how she handled the pain was also noted. What the??!!!

The fence wasn’t at ground level, she didn’t trip and fall on the spikes while on her way to help out at the local soup kitchen. The fence was there to keep people out and, I thought, did quite a good job. She was clearly trespassing, I mean if she had a key she wouldn’t have had to jump a high fence to get in. The thing that annoyed me the most was that they cut a section of the fence away to get her down and trundle her off to hospital. This church was first opened in October 1845, the fence is possibly of the same vintage so damaging it should be a crime itself! When I looked up information about this church I found that it has a claim to fame that most people will not know, it was the place where Ned Kelly’s parents were married.