In 1929 a moth type plane was lifting off from the airfield at Eagle Farm in Queensland when an unwanted passenger made its presence felt.

According to the article:

“The snake was of a non-poisonous type about three feet long and appeared just after the machine had risen from the ground. The passenger struck at it with a camera he was carrying in time to prevent the snake biting him. The camera struck the edge of the cockpit and fell overboard.

The passenger then attempted to beat off the reptile’s attacks with his boots, and afterwards tried to raise himself with the intention of moving along the wing.

Captain Tapp, glancing around, realised that something serious was amiss and thereupon steered a straight course back to the hangar, where the passenger lost no time in jumping out of the machine.”

What a politely written article. I think I am going to take the opportunity to rewrite it with my version of what probably happened.

Once the plane took off, a startled snake appeared near the feet of the passenger. In a panic the passenger threw his camera at it with such dreadful aim that it was lost over the side and crashed to the ground.

The snake then did its best to get away from the flailing passenger, who was now frantically stamping with his boots while trying to get his safety belt off under the misguided apprehension that he would be safer on the wing.

Fortunately, they were at low altitude and Captain Tapp, after the screaming called his attention to what was going on, was able to get the plane back onto the ground before the passenger fell to his death.

I am not saying that the snake didn’t want to bite the passenger, I’m just a little doubtful that the snake, finding itself in such confined quarters with a human, was doing anything other than trying to get to safety!

These stories always end with “The snake was then killed” don’t they? A pity, although in this case I think the snake was probably having a heart attack of its own by the time they made it to the ground.

If this sounds unlikely you might want to look at these earlier posts about critters in unexpected places.

Bees on a plane.

Or the news report from the snake that went along for a flight last year, although with far less panic. 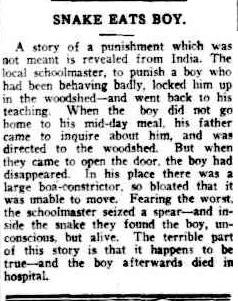 Sometimes when you see misbehaving children you wish that some sort of horrible punisment would be meted out to them right then and there.  Annoyingly though, they usually get away with it and you have to go on your way wishing that their parents knew what discipline meant. Grrrr.

In 1938 a young Indian boy was misbehaving in class and was banished to the woodshed as punishment.

Unfortunately for the boy, a passing boa-constrictor took a fancy to him and being squeezed and eaten became part of the punishment.

When this terrible thing was discovered they freed the boy from the snake’s innards and he was found to be still alive, although unconcious. Sadly, he died later in hospital.

Can you imagine this teacher ever having discipline problems in his class again? I expect that once the terrible fate of this boy became known the mere threat of being sent to the shed was enough to make any of the other school children behave!

Of course, expecting any of them to ever go out to the shed for wood again might have been a bit much…

After the post about snakes the yesterday some of the comments made insinuated that some of the animals native to Australia might be a little dangerous. I mean, really! They are only dangerous if you enter their habitats, if you stay indoors and don’t venture out you are mostly safe, so I don’t really know what we were talking about…. 😉

Anyway that reminded me of this clip that did the rounds a short while ago. In this version of the food chain the snake came off second best to a spider. No need to be scared of creatures in Australia. None at all….

The bit of this clip that freaks me out the most is when the guy puts his hand right up to them to show us how large they are. If I was there all you would get is the cloud of dust and the sound of an ‘aaaaaaarrgghhhhhh’ fading into the distance.

A while ago I did a few posts about recent unexpected encounters with snakes as reported in the news. One was about a pilot and the unqualified assistant in the cockpit who appeared mid-flight. The other post was a duet, one poor woman had been bitten on the foot while driving, then tossed the snake out onto the road, while another woman returned to her car to find a hitchhiking reptile sunning itself on her dashboard*. 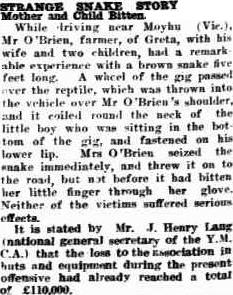 In the comments that followed one of my regulars and I mentioned a story we had heard regarding the running over of a snake in your car. We discussed the possibility that it might tangle in the undercarriage or such and be carried along to your destination to exact its revenge when you step out of the car door.

Although we were unsure as to whether this  was a true story or an urban myth we are very happy to never find out first hand.

Over the weekend I found this article which, while not confirming our fears, certainly makes me glad that any snake I have unintentionally run over has been left lying partially squashed on the road, and not gone all Cape Fear on me.

The O’Brien family were out driving in 1918 when a wheel of their gig passed over a brown snake, catching it up and throwing it onto the floor. Their young son was on the floor of the gig and the snake coiled around his neck and bit him on the bottom lip. Mrs. O’Brien bravely grabbed the snake and threw it back onto the road, being bitten herself in the process.

The O’Brien family were very lucky, brown snakes are extremely poisonous and still cause deaths in Australia. I suspect it was a less dangerous species and they mistook it for a brown snake. Understandable, because, quite frankly, if there was a snake wrapped around one of my kids necks accurate identification would be quite far from my mind!

*A few days after posting about those unwanted encounters I was excited to receive an unexpected and very interesting comment from a certain Lady Vox, who was the victim of the sunbathing snake, telling us more details about her ordeal and confirming my thoughts on the liberal use of bug bombs to de-snakefy her car for future use.

De-snakefy, another new word you heard here first. We say de-spidefy and de-webbify regularly at home, fortunately there has been no need for de-snakefy yet. 🙂

Snake on a plane, for real this time! ABC News.

I was watching the TV news this afternoon and on the ABC was a report of a snake on a plane in northern Australia.

The pilot was making a scheduled flight and a snake popped its head up near the windscreen. Eeeek! He called it in and turned back.

On the return trip it poked its head up a few more times, and then on landing it slithered across his leg. At the time of the report they had been unable to find the little critter so the plane was grounded until they were sure it was gone.

I found the best part of the website report was that they had heard of a crocodile loose on a plane but not a snake. Really? I can see how a snake would get its way onto a plane to pop out at an inopportune time, but surely the croc was heavily sedated and tied tightly before it even boarded!!

Click on this link to see a very calm pilot, when I would still be shaking! Snake on a plane grounds Top End flight – ABC News (Australian Broadcasting Corporation)

This is an interesting tale. I am not sure exactly how impossible it is for a dog to immediately become a transmitter of the venom a snake just injected into it but I suspect that impossible is the key word here. Clearly these people believed it though.

I wonder if James Wilkinson actually showed real medical signs of poisoning or if he just convinced himself he was affected? I suspect that he was actually bitten by the snake while he was paying attention to the dog that was chewing on him!