I haven’t written about sea monsters for a while so when I found this article I just had to share it with you.

In 1922 a ship steaming along the west coast of Africa found itself entering and area where a terrific battle seemed to have taken place.

Captain Poole described what he saw;

“The sea was for miles blood-red; it took over an hour to get through the battle area. On the surface were some hundreds of whales all of them having suffered in the struggle. Some were just able to move slowly along; few, if any, could move quickly.”

None of the sailors knew what had caused the carnage, but suspected that the whales had been attacked by swordfish.

Can you imagine what it would take to cause such a massive and terrible scene? Miles of blood-red sea and hundreds of dead whales is certainly a sight that would be hard to forget.

I am not sure if whales and swordfish are usually deadly enemies though, I thought that only sharks or killer whales attacked whales.

A little more looking around and I found an article from the Wanganui Chronicle in New Zealand from 1908 about a battle witnessed by sailors between a swordfish and a whale with a calf.

After much thrashing about the whale managed to use its tail to stun the huge swordfish who was then hauled on board the nearby boat and taken off to Auckland to be frozen.

I wonder what kind of horrific battle (sharks, Orcas, swordfish….?) there was to have left such carnage in the path of Captain Poole’s ship. Imagine if they had sailed through the area a little earlier and been caught up in it. Perhaps there would have been no-one left to tell the tale…..

I haven’t done a post about a sea monster for a while and a quick check revealed to me that I hadn’t yet posted about the Girvan sea monster. I love this one, it is not often I get to post an article about a sea monster complete with a newspaper photo. Luckily some smart person took a picture of the carcass that washed up on the rocks at Girvan, West Scotland in August 1953.

Just as well they did, shortly after the townspeople, annoyed with the stench of rotting sea monster, poured oil over it and threw on a match, ruining any chance of the remains actually being identified.

A pity that instead of trying to hunt down the monsters mate, who was reportedly swimming near the coast, they didn’t try taking a photo of that too!

Girvan is also known as a town close to where the coastal cave at Bennane Head is. This cave is was said to have been the home (den of evil?) of the cannibal family in the tale of Sawney Bean.

Sea monsters AND cannibals? The parents of that town would have had no trouble making up stories to scare their children!

Twelve thousand plus tentacles clinging onto your ship. Not a good day on the high seas.

I wonder if the two poisoned sailors were poisoned dead, or just poisoned sick?

Were large amounts of octopussies a common thing in Erquy Bay? If not this is an even more interesting event. Yeah, I know, octopussies is not a real word, but octopi and octopuses sound no better.

I tried looking for a collective noun for a group of octopus and it would appear that there isn’t really one. I think if you were on the wrong end of this small invasion in 1906 you might have gone for legion, army or horde. In my search I found someone suggesting a tangle of octopus. That works for me, I think the first word to mind when you saw a large group of octopus would be tangle.

What a great ‘one that got away’ tale for the fishermen, I doubt their day would usually involve beating off sea creatures with a hatchet. I sincerely hope one of the besieged sailors backed away from the side, up to the captain and said, ‘You’re going to need a bigger boat’.

If you know the actual term for a group of octopus please tell me!

We have all heard of Lake Como, right? What do you think of when you hear the name? Beautiful old mansions in meticulously manicured gardens? celebrities on holiday? Ridiculously expensive real estate? This article tells me that in 1946 that there was a monster spotted there that had, excitingly, a great horn and gigantic scales. This unexpected monster was 100ft long and, after overturning fisherman’s boats, roared and disappeared. 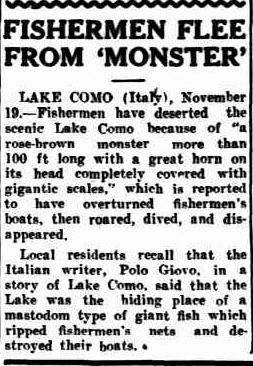 This article from 22nd November 1946(http://nla.gov.au/nla.news-article56408745) uses the word mastodom. I just love it when people come up with vaguely technical words to describe something they know nothing about (see an earlier post ‘Lusus Naturae’).

If you google mastodom you had really better be interested in heavy metal. I was unable to find any giant fish under this name.

A Mastodon is an elephant-like beast that existed for millions of years until fairly recently (over 11,000 years ago) and is quite difficult to describe as a giant fish. I wonder what word the journalist was really thinking of? Were they just hoping the masses were so uneducated that they would accept any monstery sounding word?

I am sure that if an elephant appeared from the tranquil depths and tipped over my boat before disappearing I would be quite surprised but I don’t think that this is what ‘Polo Giovo’ was referring to. (I think they really meant Paolo Giovio. A historian in that area who died in 1552.)

There are not enough monster sightings these days, mores the pity….. I am dying for this monster to reappear and take out a random movie star after overturning their luxury cruiser.

Haven’t had a sea monster for a while so here is an article listing quite a group. I was interested to see that the prevailing thought in 1926 was that man had already classified most of the worlds animals. I admire their self belief but I think we all know that we are still finding new critters, large and small, every year. Either way, they were sure they had never before seen creatures like the ones listed in this article.

The Florida monster was clearly well-fed, weighing 15 tonnes and containing a 400 pound octopus, a 1500 pound Blackfish and 4 hundredweight of coral (a US hundredweight is just over 45kg or 100-ish pounds).

The Bombay monster that was 25 1/2ft long and described as ‘human-faced’ with sharp teeth in a mouth that was 3ft long. Not sure about you but none of the humans I know have a 3ft mouth. This monster was still alive after 48 hours on land.

The creature found at Port Fairy was an interesting collection of body parts. Over 9ft long with a tail like a screw shaft, nose like a rhinoceros (maybe they mean horn, nose is not very exciting, just a hole out of each side of its snout) a huge toothless mouth and soft black skin.

Yarmouths one was a little boring, seal-like with a beak and porpoise tail, double row of teeth and a blowhole.

The fish in Maine was described as having a wide head and a mouth like a bag and gristle instead of bones sounds to me like a small basking shark.

Haven’t had a sea monster for a few days and I thought I would put in the most well known monster of all. Here is an article suggesting that Nessie is not real and that a string of mines set in 1918 surfacing and sinking is responsible for the sightings. As for the insinuation that Nessie generally appears at the start of the tourist season and that she is letting the side down by not being seen for a while…