Here we are at round two of the dog vs shark wars. Once I saw this picture of a happy pooch I hoped it ended in favour of the dog rather than the unfortunate Fluffy poodle of yesterday’s post. 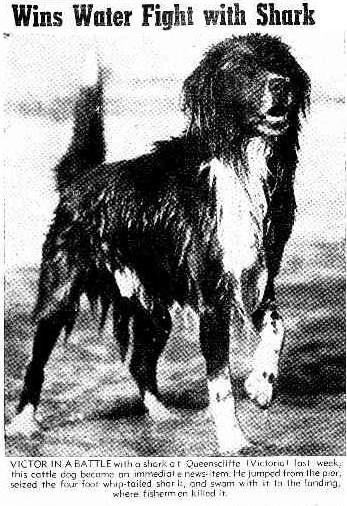 In that post, and thanks to the ongoing amusement in the comments, we imagined a wife’s pampered poodle with an annoyingly tinkly bell on its collar being taken for a late night walk by a long-suffering husband.

We couldn’t really imagine too many ways that bell from a small dog’s collar made its way to the insides of the shark that those fishermen caught in 1911.

Even more unlikely was that a bell, heavily corroded from the digestive juices that had already consumed the poodle and the collar, would be ringing from the insides of a shark but we were willing to overlook that in support of an amusing story.

The Border Collie in this report was clearly made of sterner stuff than our imaginary Fluffy poodle.

In July 1938 he leapt from the pier at Queenscliff, grabbing a four-foot whip tailed shark in its mouth and swimming back to the landing. The shark was killed by fishermen but I really think that the dog was probably capable of doing it on its own, don’t you?

I hope that this dog didn’t ever overestimate its own abilities, imagine if it took on something bigger or a shark with a bigger friend lurking under the pier? Eeek!