Ned Kelly’s remains to be returned to his family.

The ABC news today is reporting that the remains of the famous bushranger Ned Kelly will be exhumed and returned to his family for burial.

We should all be pretty happy to hear that, no matter what your opinion of Ned Kelly’s crimes. Why should we be sympathetic to someone like him, you ask?

Because until now the remains belonged to the developer who bought the old Pentridge Prison site where he was buried. Not family, not a museum, a residential property developer who was going to use them as a tourist attraction. 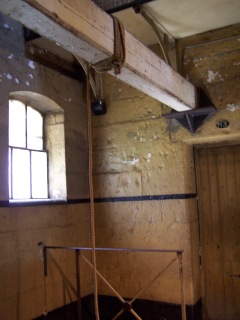 Ned Kelly was a bad guy, no doubt about that, but I don’t think that anyones bones deserve to spend eternity owned by a property developer when there is family out there wanting to give you a proper burial.

If you are interested, other posts I have done on Ned Kelly are.

No rest for Ned.

Where will Ned rest in peace?

No rest for Ned.

Poor old Ned. With the news yesterday that the remains of the infamous armour wearing bushranger and Australian icon, Ned Kelly, have been positively identified, will he finally get an actual place of rest?

After his execution, Ned Kelly was originally buried in the grounds of the Melbourne Gaol (I did an earlier post about Ned’s ‘mum’ telling us his story in the gaol museum). When the prisoners graves there were opened in 1929 his remains were spread far and wide by souvenir hunters, although most were quickly returned. After this little ‘excursion’ his bones were moved to Pentridge prison. His skull spent some time at the Australian Institute of Anatomy, then was moved back to the Melbourne Gaol museum. It was stolen from there in 1978 and hasn’t been seen since.

There has been much discussion in the media as to what should be done with him now. I don’t think his remains should be treated as a drawcard for some tourist attraction. Shouldn’t he be allowed to be buried peacefully? He was hung for his crimes in 1880, after all. It isn’t like allowing his bones to be buried in Greta with the rest of his beloved family is letting him off the hook, is it?

I know, he was a bad guy. In his short, but lively, career he was a horse thief and not averse to re-homing valuables. He also took hostages, although once supplied them with dinner and a show. The killing of a policeman named Lonigan was the crime he hung for, although he also killed two others named Scanlon and Kennedy. He was accused of shooting at (but not killing), a policemen named Fitzpatrick but he was being a bit too forward with Ned’s sister, so probably got off lightly.

Was he a hero or a villain? The Ned Kelly story is part of Australian folklore regardless of your point of view. I have noticed in my travels through old newspapers that the policemen of yesteryear were not the highly trained officers we have today. Rather, they were the men who were the best at getting people to do what they wanted, and weren’t afraid of a fight, often in court themselves. I am generalizing, of course. Some officers were dedicated to justice, but Ned and his family believed they were the victims of persecution by the police and behaved accordingly. I can’t tell you if they were unfairly treated or not, although he and his family behaved in ways that were certain to attract police attention.

Judging the incidents of the past by the society we live in today is a bit unrealistic. It is hardly surprising he is seen more and more as a hero. Crime is glorified on television these days (Underbelly, anyone?) and I am sure he won’t be the last bad guy whose name will be remembered long after he is gone. 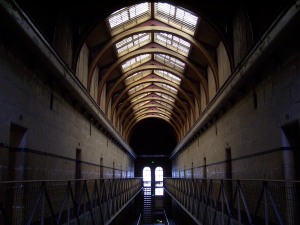 We took the kids to Old Melbourne Gaol on Saturday. They hadn’t been there before and when we stretched our memories we concluded that our last visits were probably with a school excursion. We arrived in time to find a seat for the 12.30 show performed by Ned Kelly’s mum. Just as well we weren’t any later as there was quite a crowd and the usher had to find extra seats for last-minute arrivals. The seats in the main galley were full and we sat to the right between the staircases. Once the show started I realised we had a great spot as if you sit in the main galley you get a good view of the replica of the famous amour but if you sit in the smaller space to the side you miss nothing and the entire show  is performed against the background of the gallows where Ned ended his life.

The entry fee was $52 for a family and I would have felt a little ripped off if the only thing that fee covered was entry as inside it is completely self guided and they haven’t had to spend too much money on the decor. Once the show started I felt that we had not wasted any money as the young woman who did the show was absolutely fantastic. She strode through the door dressed in a long black period frock with a white shawl draped over her shoulders and in an Irish accent told us the story of her family, Ned and the troubles that the Irish had to endure at those times. I thought the language she used was a perfect balance of old-fashioned terms and clear English. The kids in the audience could understand what she was talking about without it seeming as though it was some modern-day person telling the story. She got a few members of the audience up to help her act out the story of the time a policeman came to the house to arrest her young son Dan. The young boy that was playing Dan was quite happy to get to call the policeman ‘you bugger’ in front of the crowd and they got an enthusiastic round of applause at the end. The show then continued and even though it was quite long at no time did I look at my watch and, even more tellingly, none of the kids in the audience acted up which is always the signal that the show had better be winding up soon.

The story she was told was sympathetic to Ned and his family, as expected, and not told with any sympathy to the police (the word buggers is used most of the time when referring to them). If you think Ned and co. were the bad guys you will probably be annoyed with the bias but if you are like most people who just see Ned as a hero and conveniently forget the police being killed in the making of the story you will really enjoy it. The story was told with real emotion and all four of us raved about the performance all the way back to the car. The Irish accent she used through the whole show had me convinced of her heritage so when she ended the show with the offer of having your photo taken with her and getting to try on the famous helmet speaking in perfect Aussie I was further impressed. There was an instant queue of kids for the chance to wear or hold the helmet. Of course the armour was a replica made of fiberglass (heavy enough to make me think that a metal one would have crushed the kids who were lined up to have a turn!) and we were told that the real thing was in a museum in Geelong and was now worth six million dollars(!).