Fifteen year old New Yorker Arthur Rappoport was clearly dedicated to learning his saxophone. According to his proud mother Olga he practiced for four hours a day. 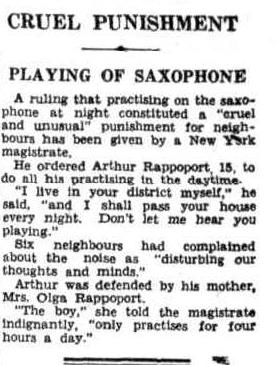 Clearly practice doesn’t equal talent, as six of the neighbours complained in court that his playing was “a cruel and unusual punishment” “disturbing our thoughts and minds”.

The magistrate in the case ruled that Arthur was to only play his saxophone during the day; presumably the neighbours were far more able to cope with their minds being disturbed during daylight hours.

The magistrate stated that he lived in that district himself and would be passing this dubious musician’s house every evening to check that the peace was being kept.

I wonder if young Arthur continued playing his preferred instrument after this ruling, or was the weight of disapproval of an entire neighbourhood enough to quench his love of music? 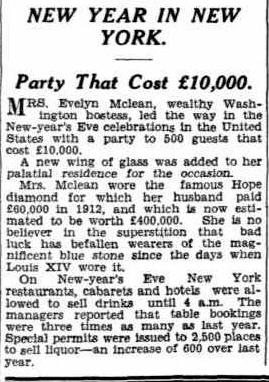 To accommodate guests on New Years I cleaned the bathroom and sent the man of the house out to the shop for snacks and extra toilet paper. In preparation for her guests Mrs Evelyn Mclean built an extra wing of glass on her already palatial residence. I think that this clearly shows the difference in our financial situations!

In 1937 Americans were suffering under the hardship of the Great Depression. The average weekly wage for men in America at that time seems to have been about $1700. For her to spend nearly 6 years of average earnings on a party for her 500 nearest and dearest just shows that she wasn’t doing it as hard as the rest of her countrymen!

Of course it doesn’t take poisonous alcohol to cause drunken brawls, I am sure there will be quite a few of them at New Year’s festivities around the world over the weekend.

Enjoy your New Year’s whatever form your celebration may take!

Not the kind of christmas present anyone would want. 1930. 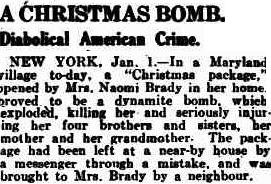 When you open your christmas presents in a few days time just be glad that you are no going to open this gift.

I wonder who sent this and why. It was lucky the neighbour whose house it was incorrectly delivered to passed it on and didn’t keep it for themselves….

Estranged wife and a birthday cake from above. 1947.

My computer and the internet are having relationship problems this week so I see no reason to stray from these appropriate articles about the many, and I suspect turbulent, relationships of the much married Tommy Manville at the moment.

At any time my tenuous connection with the interweb could drop out, and really, he was such a popular fellow these articles are easy to find. Don’t accuse me of laziness, it is really just a kind of speed-posting!

In this article wife number eight is going to send him a birthday cake by helicopter even though they are estranged and have filed assault charges against each other. Hmm, I wonder if the helicopter is going to gently touch down in his lavish gardens and deliver a beautifully decorated cake? I kind of hope it is more like black-clad hitmen with weaponized baking and more assault charges filed in the morning. 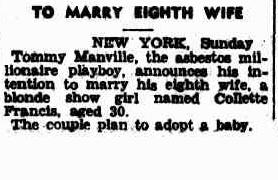 Sorry for the very late post today. My computer and wordpress were having issues and not speaking to each other. Finally got them talking just before I was ready to pack it in and go to bed!

Tommy Manville must be quite a catch, or perhaps he is just quite easy to catch.

In 1944 the lucky showgirl Collette is wife number eight. Yesterdays post was wife number five in 1939. I have a feeling I could do a whole week of Tommy and his conquests.

I am glad they plan to adopt a baby, back in 1944 I think it would have been a quicker process than it is today, and judging by Tommy and his habit of quick wife trading they might not actually have time to have an entire pregnancy…