I have done a few posts recently about the Rainbow Lorikeets (i, ii) who have started visiting our garden.

On Friday the kids and I were called over to the back window by the Man to have a look at some new additions. On the grass, squabbling with the large crowd of Rainbow Lorikeets were two parrots who, although slightly smaller, looked very similar in shape.

Instead of having the bright blue head they were totally green with feathery yellow scales showing on their chests.

Unsurprisingly these parrots are called Scaly Breasted Lorikeets. Since that first sighting they have joined the regular crowd and are often seen battling for prime seed spots with the bigger, and equally assertive, Rainbow Lorikeets.

This parroty crowd can be unbelievably noisy at times although they seem to be their own worst enemy.

Last week there was a period in one afternoon when the crowd was larger than normal and as such were extremely loud. They started flying out of the back garden, circling around the front of the house, then landing back on the grass. They would eat a few seeds then do it all over again. This went on for about 10 minutes and was driving us crazy!

I go up to see what on earth they were doing only to see a Brown Goshawk coming into the garden so fast it was as though it had been shot out of a cannon! I guess the Goshawk was hanging around nearby waiting for its own chance to eat and that was what was keeping the Lorikeets on the move.

Of course once it had made such a serious, although unsuccessful, attack the Lorikeets were gone for the afternoon. The Goshawk hung out in the trees close to the house for a few minutes and then disappeared. I was disappointed that I couldn’t get a photo of it but I was glad it didn’t hang around to feast on one of our dinner guests!

After posting the picture yesterday of the katydid that managed to avoid being weeded, I thought I would follow-up with this photo of a tiny katydid I took a few weeks ago.

When katydids first start wandering around in our garden they are tiny, (this one was only about 5mm long) and very cute. We can see them all over the place for about a week and then they seemingly disappear. Later, they turn up looking more like the one from yesterday but I really love them when they are this small.

I found out that the reason some of these tiny creatures are green and others are candy cane striped is due to what they are eating. I am not sure what the ones who look like this could have eaten to make the so red, but knowing that makes me want to catch a few and only feed them purple or orange food…..

Tiny, but with attitude….

If you are scared of snakes, look away now….

I know that some people delight in sharing the terrors of Australian wildlife with the world, making them think that after setting foot on our shores death could come from anywhere, at any time, and without warning. This news article from the Herald-Sun is not going to help matters…..

Today the Mitchell St Childcare Centre in Darwin was temporarily closed thanks to an ‘inundation of snakes’. How many snakes make an inundation you ask?

The director of the childcare centre was alerted to the snakes presence when a baby one was found in a side room. They had the same snake problem last year so she had a fairly good idea of what was going on.

Some blokes from the council turned up to take care of things and decided that taking some wall panels off would be the best way to get to the root of the problem. Once the panel was removed 23 babies, and their 2.5 metre mother, were discovered and a wildlife ranger was called to take care of them. Inundation indeed!

The snakes turned out to be harmless Carpet Pythons, and many of the kids, and the parents who were arriving to pick them up, seem to have been quite amused by proceedings. Carpet Pythons are quite common in Darwin so I guess they were just glad it wasn’t their own wall the snake decided to make a home in.

If you are a little nervous of the wildlife in Australia don’t let this put you off visiting us though. For your entertainment here is a song to  encourage you to come; the Scared Weird Little Guys Come to Australia. 😉

Number 2 son is well known for his love of bugs and small critters. Well, not all, they must have less than eight legs to get on his good list.

If there is ever a bug who has made its way into the house or caravan and needs evicting we call for him. It will be rescued with glee and returned safely to a more appropriate environment.

Last weekend this Christmas Beetle needed rescuing from Jack. It was hanging around near the glass back door and, because of the cold, couldn’t move too speedily. Because of this it nearly became a doggy breakfast entrée.

The beetle was saved, examined, warmed up in little hands, and escorted to the front yard, well out of canine reach. 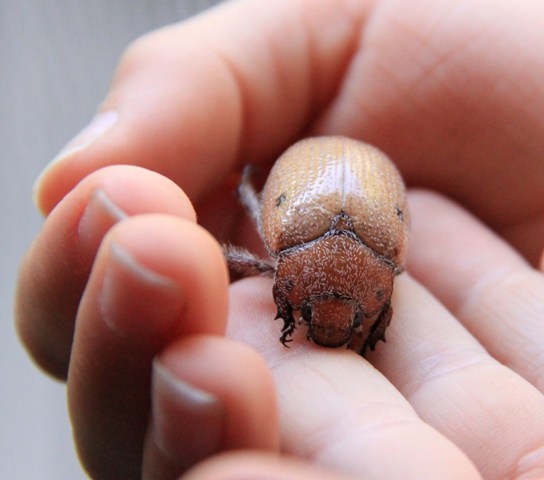 A day off and another spider. A cute one this time.

It is an unofficial long weekend here in Melbourne so as you read this post there is a good chance I am relaxing in some way. It has been beautiful weather here for the last few days, lets hope it continues until Wednesday when we all have to go back to normality.

Of course today (Monday) isn’t a government sanctioned day off but most people are following the great Aussie tradition of taking a day off work for the slightest reason.

Tomorrow is Tuesday, Melbourne Cup day, which really means most of Melbourne grinds to a halt with many people either attending some sort of racing celebration or going camping for the weekend. We went with option 3 which means staying home, enjoying the sunny weather and catching up on all those things in the garden that were neglected while we were away.

Over the weekend the Man even made a quick sortie up the Hill with the mower until the kids dobbed him in. I stomped up there, pointed out how close he was to some of my precious orchids and sent him back to the shed. I think he was quietly pleased that he got any of it mowed at all and I admit that I let him do the bottom (orchid-free) bit before I stopped him just so he would think he had slipped one by me 😉

The kids and I found this jumping spider on one of the Agapanthus in the back yard while we were wandering around. Agapanthus are horribly invasive and we really want to get rid of them but their tangled roots are the only thing keeping a steep part along the fenceline from washing into the neighbour’s garden. Until we can be bothered building a huge wall to keep the soil in one spot we will let them keep doing their job and just snip off the flowers each season before they get a chance to spread their myriad seeds throughout the neighbourhood.

As you might have guessed, I love taking photos of spiders but I don’t have much tolerance for them, walking on me means they get the boot. This little guy though, I can only describe him as cute. Sorry to go against the grain of my normal spider smashing attitude but look at the photo below…

I have found that normally spiders don’t seem to react to people too much unless they are running away from you, or running at you (Huntsmen *shudder*). Jumping spiders though, they will see you looking at them and bounce over for a closer look at you with their giant eyes, always looking like they are about to say something interesting.

I was able to get a heap of photos of this guy in different poses by getting Number 1 to stand in different places and attract his attention. He was very interested in what was going on, bouncing around from leaf to leaf to follow the noises just like a puppy. 🙂 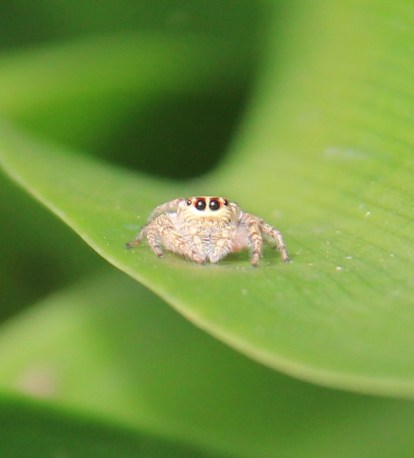 Look into my eyes….

This post has been a week in the making so I hope you like it. But it is only one photo you say! What’s so hard about that?

Well this is a photo of a Blue Sun Orchid, so named because these little lovelies only show their faces on a nice day when the sun shines brightly on them. Yes, it has been sunny all week, that is not why the photo took so long.  I’m confessing to the fact that it has taken a week between me noticing they were ready to flower in the backyard and me getting coordinated enough to be out in the backyard with my camera when they are open. It was just as well that I took the photos when I did as the weather changed the next day and they will probably go back into hiding for a while.

When the sun is not on them they are tightly closed and pretending to be just another piece of grass, if slightly lumpier. Not a very exciting photo for you!

Some years they are bright blue with tiny dark spots although this year they all seem to have gone for the pale blue look. In the past we have also had salmon pink ones as well. Unfortunately I have not seen any of them for a few seasons, hopefully they are just on holiday.

There are over a dozen of these shy little guys in one open section of the Hill and, as the Man has been forbidden from mowing up there for a while, the grasses have grown up around them so they are doing a pretty good job of hiding. I actually thought there was only one or two and was worried that something had happened to kill them off. When I went up there to check them out I was amazed, and very happy, to see so many. There are other single ones scattered under the trees but they get so little sun I am unlikely to ever be organized enough to get a picture of them. 😉 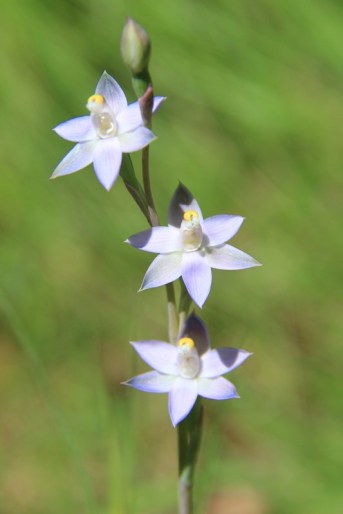