Lucky these people didn’t build their house a little bit to the side, wasn’t it? One evening in 1893 a very selective storm cloud opened near the top of Mount William in Victoria and dumped an amazing amount of rain over an acre of land close beside a  house. 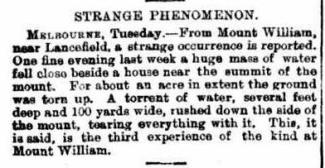 Reportedly, the water that fell caused a torrent that was several feet deep, and fell so hard it churned up the ground. It then tore down the mountain in a torrent a hundred yards wide.

Apparently it was not the first time this phenomenon had been observed in that area, this being the third time it had happened.

If that was my house I bet my washing line would have been exactly where the water was concentrated. Yes, I just came racing in from saving my washing from the rain moments before I found this article…