Yesterday’s post was about a 1933 article on the Nandi bear, a terrifying creature said to be the size of a polar bear, who dropped out of trees onto the head of its unsuspecting victim. I was not sure if the bear dropped out teeth first, killing the prey that way, or if it just relied on hundreds of kilos of unexpected furry impact to knock the life out of them before beginning the feast.

Luckily I found this earlier article from 1925 giving us more details about the killing style of this terrible beast.

Apparently the Nandi bear didn’t just leap down and eat the victim whole, it was far more selective than that. According to this report the Nandi bear feasts on human brains, then scalps the victim. Nice.

Now, I don’t know too much about this biology stuff, but I think it is a safe bet that a creature the size of a polar bear who would clearly need a substantial amount of food to maintain good health and only exists on human brains in a remote jungle would be fairly easy to kill off. STAY AWAY PEOPLE!

A few weeks without its major food source and surely the creatures would be so weak that there would be very little danger of any of them climbing trees or leaping out unexpectedly. You could just stroll along and dong them on the head with a club when they lunged pathetically towards your delicious brain. Voila, a nice brown rug with strangely human hands and backward thumbs to adorn the floor of your hut.

Of course I am interested to find out what the Nandi bear does with the scalps of its victims. Is there a bear-sized hut deep in the jungle decorated with human scalps?

I’m going to add both the Thylarctos plummetus (Drop bear) link again, just because it is such a perfect match (and I’m still laughing over some of the comments), and a Bundaberg Rum advert (starring the Bundy Bear) that has unintentionally, but conveniently, combined both the Drop bear story and my mental picture of the Nandi bear.

I love the thought of this deadly monster. The explorer Mr. Richard Hamilton (conveniently a film producer too, no self promotion in this article is there) is going to spend a month trekking into the jungles of Upper Kenya and brave THE WORST PERILS in order to save the natives from the man-killing Nandi bear.

I’m not sure why he is bothering though. For one, a month is hardly enough time to have a good look around in your average jungle, is it? Lucky he is picking up those two white hunters that will help him in his travels…. I wonder if they get paid, monster or no monster?

Secondly, according to this article, the jungle is haunted by spooks, and all who enter it are believed to be doomed. Even if he gets rid of the Nandi bear I doubt that the locals will be queueing up to make their home in such an uninviting place.

Rumour has it that the Nandi bear was as big as a polar bear and would drop from the trees onto its victims.

Can you imagine something the size of a polar bear dropping from the trees onto your head? No wonder that article also says no-one has yet seen this animal. Hardly surprising. The last thing anyone who has encountered this creature saw was 300+kg of death falling from above. You are not likely to crawl out from under that and run home to tell your family, are you?

If no-one has seen it how do they know what is lurking in the trees?

Could an animal that size actually conceal itself in the foliage? Wouldn’t the creaking of branches give away its position long before any dropping could occur?

Here in Australia we have a much smaller version of this frightening creature, the Drop bear (Thylarctos plummetus)*. It is a carnivorous koala-like creature that waits in the trees for unsuspecting travellers to walk under before dropping onto their heads and, well, eating them.

*This is a great link from the Australian Museum. If you have a look, please read the comments. There will be a lot of scared people out there…..

This sounds pretty exciting, an Animal Planet TV crew think that they have recorded yowie noises.

I really want them to have found evidence of this mythical creature but…. well…I doubt it.

They suggest that if they were in North America they could attribute the noise to a large bear. Since we don’t have large bears here they say it must be a yowie. Exciting! maybe…

I wonder if they have ever heard the calls of the small bear-like creature we have here?

Hearing a koala call echoing through the silent bush at night out in the middle of nowhere is scary. Even when you know what it is they still sound like they want to kill you…. 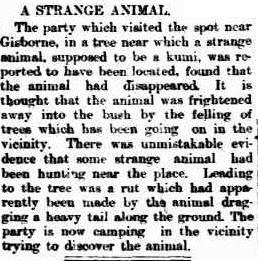 I wonder what this strange creature was. The only thing I could think of with a tail heavy enough to dig a rut like that was a crocodile. Fortunately for us they are not a tree-dwelling species!

I admit that my cryptozoological knowledge is not overly extensive but I was surprised that I had never heard of a kumi before. My internet search for one mostly bought up beautiful Asian women. Not usually found in trees dragging a heavy tail….

I kept searching and found this other article, published a few days earlier, about the mysterious kumi. It turns out that it is a type of lizard. Australia has no shortage of beautiful and interesting lizards but, really, we don’t need another one that is huge and lives in trees. Goannas do climb trees and are not something to be trifled with, but surely these people hunting the kumi had seen a goanna before, they are hardly sneakily elusive.

Until 18,000 years ago we did have the 5 metre plus Megalania, but at that size it was never going to live in a tree. Just as well. Several hundred kilos of lizard dropping on you would certainly negate the need for the giant claws and teeth (and possible venom glands) it also possessed.

I doubt that a pygmy strain of Megalania had managed to keep going undetected in the wilds of Gisborne until 1898. I wonder if this kumi was an exceptionally impressive specimen of the standard goanna or something else? I can’t imagine what that something else might be though. A Komodo dragon dropped by aliens? 😉

I found reports that when Captain Cook was in New Zealand he had been warned by the Maoris that there were giant lizards living in the trees nearby. Sounds a bit to me like they were trying to keep Cook from making himself too comfortable, a bit like the ‘drop bear’ foreign tourists are often warned about when visiting Australia!