Poor old David Attenborough. Just like a TV crime drama, he is out there in his wellies and gloves to do a spot of gardening and unearths the grotesque skull of a murder victim. Ok, I really doubt that Sir David was out there with the shovel. Either way, a human skull was found in his garden recently. It has been identified as part of the body of murder victim Julia Martha Thomas who was murdered by her drunken female servant, cut up and her body parts boiled down in a copper in 1879. Another copper misuse! The head of Julia Thomas was never found and it was assumed that it had been thrown in the river where the rest of the remains were found in 1879. All these years and poor Mrs Thomas was just waiting for the flowerbeds to be enlarged.

Catherine Webster was executed in August 1879 and once sentenced to death she had admitted that she was the only one involved in the crime. Obviously she never felt remorseful enough to tell them where she put the entirety of the remains though.

Yet another injury from a copper. I think I could start a blog dedicated to listing all the damage done by using this seemingly inoffensive piece of household equipment. This lady was shot by her copper…yeah… shot…. Generally this type of copper is unarmed, unlike the police type of copper. Regardless of this, Mrs Croxford was shot in the back while preparing hers for use. Blown up, shot, burnt, set on fire. Is there nothing a copper can’t do to an innocent washerwoman?

Posted by metan on May 30, 2011
Posted in: old newspapers. Tagged: copper, history, money. Leave a comment

I wonder if Ernest Dunlop actually paid any attention to what his wife did each day. Did he wonder how his clothes appeared clean and dry each time he needed them? I think that a man who hides money under the copper is not overly smart and possibly deserved to lose it.

If the man of the house was silly enough to hide some cash in the oven here he would deserve to lose it too. Of course that would be because I saw it and confiscated it.

Three hundred £1 notes would have been quite a brick. I’m surprised that she didn’t notice it when she lit the fire. Of course, there is always the chance that the story is made up too. Five years is a bit of a long time to wait for your payoff though. I wonder how much money he burnt to have his ‘evidence’? Too bad for him if he burnt more than the £30 the bank gave him in return for his handful of charred fragments.

More uses for a washing copper. (or, How to devalue a mountain of gold without even trying.)

When I was looking for more washing copper disasters I found this article. It doesn’t involve an innocent washer woman being set alight or unattended children falling into boiling water. This is a cautionary tale on what not to do with a giant chunk of gold and quartz. The Holterman nugget was found in 1872 and weighed 286kg. It was 1.5m long and contained 57kg of gold. Originally worth £12000, this boiling devalued it by £500.

I was wondering how that much gold managed to not break the bottom out of the copper when it managed to collapse the floor of a hansom cab on the trip to the mint. His copper must have been a stronger version than mine! Having seen photos of this famous nugget I am not sure it would even fit into a copper.

Kids and gelignite should never mix-1932.

Posted by metan on May 24, 2011
Posted in: old newspapers. Tagged: copper, history, kids. Leave a comment 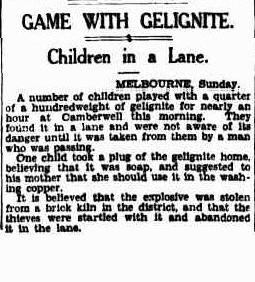 An imperial hundredweight is approximately 112lb (just over 50kg) so the quarter of a hundredweight of gelignite these kids was playing with was more than enough to blow them to pieces. Lucky for them that someone stopped by and saved them from destruction. Also lucky for the mum that didn’t use the soap-like plug of gelignite to do her washing. I think washing in a copper was quite dangerous enough in those days without your kids handing you a stick of gelignite into the bargain!

A wonder anyone survived…..

The more I look for washing copper articles the more surprised I am that anyone that had one on their property survived. Most of the articles about them are regarding women’s skirts catching fire and them being seriously burnt or killed, or small children falling into the boiling water and suffering terribly in hospital until they die. It is awful. The other thing that makes me surprised the humble copper didn’t kill everyone that came in contact with them is the other uses they were put to. They didn’t just use the for washing and bathing. They were also used for cooking. 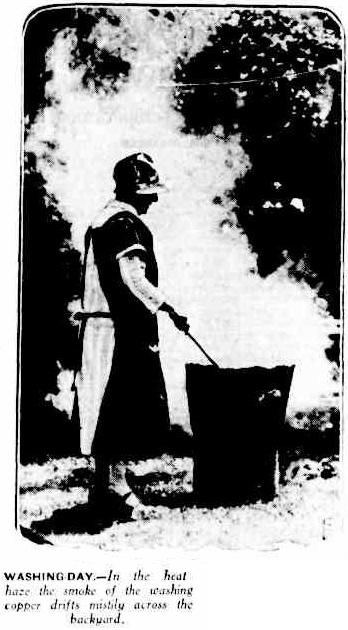 I have found newspaper references to them being used for; drying grapes, purifying honey, making tomato sauce, brewing beer, boiling jars for preserving fruit and being used as illegal stills . Once they were finished using them for cooking there was a chance that they were again dragged out for a multitude of purposes such as; boiling rope to prevent it stretching, dyeing cloth, making a solution to kill ticks in a shed, and making an arsenic-based weed killer and many other things that would not make their way into my washing machine let alone my cooking pot!

You might think that they would have a few coppers, each used for different things, and I certainly hope so, but the only recipe I found that recommended having a single purpose copper was for the making of jam. There was a lot of published advice on how to keep your copper clean and after reading all the things that it could have been used for, no wonder they were so obsessed with keeping them clean!