The pharaohs were buried with slaves and treasures to ease their passage into the afterlife and according to this article the vicar of Thursley seems to be keeping with that tradition, much scaled down of course, with his own humble funeral plans. 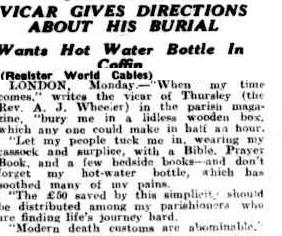 The vicar has requested that he be laid to rest in a lidless coffin with his Bible, prayer-book, bedside books and trusty hot water bottle by his side.

He does seem to have forgotten one thing though. A lamp. No point waiting for the next stage in his existence with a few good books if he can’t see them in the dark…

I  expect that the lidless part might be overlooked by the parishioners though.

I understand his intentions, but I think it would be a little too unnerving to be at the burial of a person who had no lid on his coffin.

Maybe the vicar didn’t have complete faith in the local quack and was just making sure that if the diagnosis of death was a little premature he would have an easier escape once he woke up….