Yes, bissextile. An unexpected word really, and upon my first reading of it I had an instant flash of a decorative tile adorned with an illustration taken from the sealed section of the Karma Sutra. Something not usually found in your average bathroom.

Bissextile, disappointingly, turned out to be nothing so startling. It is another name for today, the extra day falling in a leap year. Bissextile doesn’t really shout calendric term to me.

I am absolutely not a mathematician, words are the thing I love, and that will be fairly obvious to you when I say I can’t work out why on earth bissextile, twice sixth, is used for something that happens every four years. I really wanted to know why, and to share it with you, and I read any amount of explanations. No matter what, nothing made any sense to my brain whatsoever.

The usually helpful thefreedictionary.com confused me even further with the explanation of the latin at the end of their bissextile entry stating it was because the sixth day before the Calends of March on February 24 occurred twice every leap year.

Ummm….yeah…. You can’t see me but I have a glazed look in my eyes.

This article from 1952 tells me that Mrs. Myrom Palmer had bissextile births in both 1948 and 1952. In 2012 her children are now celebrating their 14th and 15th birthdays. An excuse to be cheap on the presents if you are a mean parent!

I love that the doctors estimated the chances of two leap year births happening in one family as one million to one. It is amazing how often that happens, isn’t it? One million to one chances seem to crop up nine times out of ten. (I dips me lid to you, Sir Terry Pratchett)

Brace yourself, here’s a big one for the weekend.

Angus Mackay narrowly avoided punishment for his efforts in saving a ‘beauty in distress’ while Morris Lenard, for his lack of restraint regarding his wife, was sent to trial at the Quarter Sessions.

John Scraggs wife Wilhilmena is confusingly described as his ‘dearly beloved and confounded torment’. I’m beginning to suspect he had good reason to do a runner, ‘bolting from her a mensa et thoro’ (from bed and board). She took him back but I suspect that if she is such a torment that he will be gone again soon enough.

The filthy Roger Eaton, whose unwashed clothes were suspected of hydrophobia, was charged with doing Bombastes (popular act, that Bombastes) in the marketplace. Threatening to spit and toast the attending charley like a muffin on his toasting fork was not too clever,  and he was sentenced to 7 days. For the sake of the other prisoners I hope he gets either a wash or a cell to himself.

William Sinclair considered himself a funny fellow with his muscles in rather good (tol lol) order. He wasn’t that funny if he thought knocking down an eighty year old man amusing. Annoyingly, this unpleasant person was discharged.

James Kelly seemed quite bored with proceedings, I wonder if his three hours in the stocks were more amusing.

Margaret Kelly refused to do the washing, and after sentencing threatened pirate-style to ‘jump over the wall and spifflicate your old shins, shiver the mizzen, take my word for’t’. I really wish she had had a wooden leg. Or an eyepatch. I love spifflicate. It is a word you don’t have to know the meaning to, you just know you don’t want it to happen to you. Or your shins.

The head of poor Jackey the valet was one victim of Elizabeth Browns dish-throwing tantrum as he had a soup tureen wedged over his conk. She got off quite lightly.

Sarah Burns could have also had a wooden leg with her, ‘If I come back may I be jibetted first’ (she should have finished with a ‘me hearties’).

Patrick Shean paid 50 in return for all the work he had avoided while faking illness.

And finally, Ellen Perry was charged with running away from her loving husband nine weeks previously. He will have to do without her for a further two months, but at least now he will know where she is.

Eliza Deacon, although evidently much admired by her husband was not the sort of person the police wanted sleeping drunk in the street and packed her off accordingly. I love the terms used in this article. She is described as ‘a”dicky” looking specimen of feminine beauty’ and ‘an idle and disorderly bit of crinoline’. Nasty! Her drink of choice was apparently Tooth’s. Tooth’s were well-known brewers in New South Wales at the time and you can still buy a drink from the company if you can find a can of KB Lager in a bottle shop. I love the name of one of the overseers of her (supposed) happy union, the Rev Theoliphus Tightknot.

Billy Johnson with his sticky ‘bird-lime fingers’ could have picked a better place that in the police court to borrow a pongee fogle. A pongee is not, as its name suggests, a smelly hankie but a soft thin cloth woven from raw silk. Justice was meted out with startling rapidity in Billy’s case with a sentence of three months hard labour. He didn’t even get a chance to blow his nose.

Yet another bird’s-eye fogle, this time it is killingly twisted around a squeeze, not a weasen. That along with his pimple, the blue-buttoned mandarine, sassengers for a mag, seven fathoms deep in the stone jug, bullyrag, towrowing, calumnate, pure pelucid, a pink and a chaffing crib.

Hugh Sexey’s squeeze is his neck and his pimple is his head. The opium affected blue-buttoned mandarine he resembles is a chinese official, the blue button is on his hat denoting his rank. His sassengers were on sale for a half-penny a plateful and when he found himself in the cell he was seven fathoms deep in the stone jug.

To mistreat or persecute is to bullyrag, although a towrow is an altercation or to make an uproar so it sounds like Robertson and Ryan are both as bad as each other. Ryan says although Robertson is better dressed (better togged)  she is being falsley accused (calumnate).

A tar of the first water is a first class sailor and the fair Ellen may have had her judgement clouded by the fact she was not really drinking pure pelucid (probably water) but suffering the effects of the rum she reeked of.

The highly fashionable (pink) Tom Jones was more annoyed about his broken rest than the fine incurred and James McKaig was found reeling out of an entertainment house (chaffing crib) with a fashionable companion who was hard a-weather (drunk) and possibly a prostitute (she cracks).

Some of these words are actually going to be used in my house. None of us can be described as pink, but if the man of the house is ever hard a-weather I am very tempted to squeeze his squeeze. Don’t bullyrag your brother, Stop that towrow!, Do not calumnate me. All things that I am aiming to add to the lexicon of the household. Not sure of my chances of success but it is always worth a try.

Bombastes Furioso and Lady Barrymore in a slouched castor.1832. 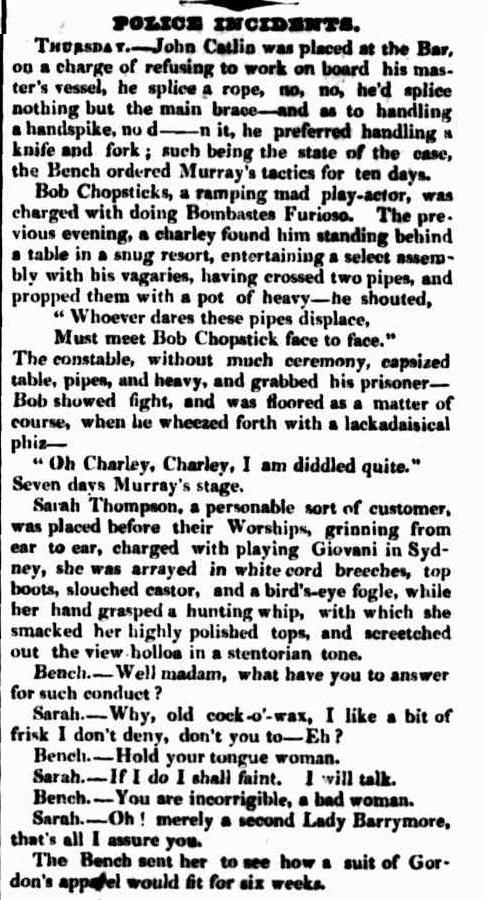 I have said before that I love the way some of these police reports were written and this is a great example of why. John Catlin refusing the work aboard ship, preferring the handling of a knife and fork to that of a handspike and actor Bob Chopsticks replacing the boots of Bombastes with pipes after a few too many pots of heavy and then being silly enough to challenge a policeman. Theatrical but unsuccessful.

I also love the picture painted of Sarah Thompson in her birdseye fogle, slouched castor, breeches, polished boots and whip calling his worship ‘old cock-o’-wax’ and referring to herself as a second Lady Barrymore.

My loyal readers will know that a birdseye fogle has been seen previously twisted about a weasen. Fortunately it is not made out of birds eyes although a slouched castor is a type of hat made out of beaver fur (and qualifies as another buried word).

I hadn’t heard of Lady Barrymore before and it appears that both the Earl and Lady Barrymore were amateur boxers in the early 1820’s. While researching this I found the story of Elizabeth Stokes who was a well-know female fighter in the early 1700’s and was apparently also known as Lady Bare Knuckles. (Look on georgianlondon.com for an interesting article about her.)  I can imagine that females stripped to the waist and fighting with a half-crown clutched in their fists might have been quite popular with the men of the times.

Sarah Thompson was sentenced to six weeks for playing Giovani. I can only imagine that, like Don Giovanni, she was a little too free (well, maybe not actually free) with her favours. Any other suggestions for this please let me know!

I would have loved to have been witness to the ‘almost ensanguined scramble for tucker and beer’ at that particular Hawkesbury picnic. Ensanguined means to cover or stain with blood. The year of this undignified rush for sustenance was 1897 and I can just imagine women and men dressed in their period finery jostling for position at the table.      A shivoo is a party or a celebration. Lord Brassey’s shivoo needed to have detectives tracking the silver so it sounds as though no matter your station in life there are always ferals ready to crash your party.