Perfect is not fun.

Due to huge amounts of rain over the last few days part of one of the roads out to the popular tourist spot Wilsons Promontory in Victoria has been covered by a landslip and one of the bridges has been cut to another campground in the park. Yesterday there were a few hundred people stuck there, including school groups. Yesterday, and again today they are airlifting out groups. Lucky buggers! Number1 son was on a school camp there last year and a group of grade 5/6 kids from our school have not long returned from a week-long camp there too. The kids all had a great time and told us all of their exciting news when they returned but can you imagine how long the stories would have been told and retold if they had been off to a camp and then they were trapped and had to be helicoptered out?

The best holidays are the ones where things go slightly awry. We have been on lots of camping trips but the ones we remember the most fondly are the ones where we teetered on the brink of disaster or the weather did it’s best to ruin it for us. We still laugh about the camping trip where the cooking fire had to be started with chemical assistance with the help of a table placed over the kindling due to the torrential rain. Then a drain had to be dug to keep the water from filling the fire hole.

Last year we took the kids on a road trip to see Ayres Rock. We were away for 5 weeks and a multitude of unexpected things happened to us and we enjoyed every minute of it. We hadn’t even made it to Adelaide and we had to find a mechanic able to stop the terrible vibration coming out of the front passenger wheel. The front end had been overhauled before we left so we were at a loss as to what it could have been. After one day of repairs and thanks to the wonderful help we received from the Toyota dealer in Clare we were back on our way, $800 lighter and carting a bag of busted bits to take back to the original grease-shy mechanic.

A few days later we pulled into Coober Pedy in flooding rain. The streets were flooded and that is not a town that has any concept of storm water drains so the water just hung around until it found somewhere else to be. We didn’t moan about it and we didn’t stress about having to put up the canvas top of the camper and get drowned in the process. We just laughed at the silliness of floods in the desert and took the opportunity to treat the kids to an underground hotel for the night. They were thrilled and we found a caravan park the next day. I bet they couldn’t tell you anything about that caravan park but the hotel has been regularly mentioned since.

When we got to Ayres Rock campground in Yulara it was still pouring. Even though we had driven for hundreds of kilometers that day we had been rained on nearly all the way. We set up between rain showers and were lucky that we have our own power supply in the camper as the rain had got into their mains and blown the power in our half of the caravan park. Again we laughed as we had power and pretty much everyone else around us just had a cold dinner and went to bed. 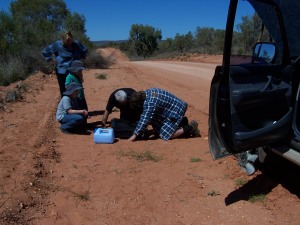 A week later we were taking the Mereenie Loop road from Kings Canyon to Alice Springs and our next blip occurred. We were driving along quietly (no we don’t hoon in the bush, too much to see) and I asked the leader of our expedition if the car was getting hot. He looked at the dash and I got a don’t-ask-me-stupid-questions look. I told him I could smell radiator water. He looked back at the dash and we came to a skidding halt. We got out to find the entire contents of the radiator spilling out onto the sand of the road 5 kilometers out of the aboriginal community of Hermannsburg. That meant we were still 136kms from Alice Springs. Hermannsburg’s claim to fame is being the birthplace of Albert Namatjira. Sadly it is not famous for it’s car repair facilities and we had to try to sort it out on our own. The leader of the expedition is quite mechanical but I don’t think there is a person in the world that would choose to breakdown in that situation. The tip of the fan had snapped off and made a hole in the bottom of the radiator. Damn. We started poking around under the bonnet and suddenly another Victorian plated car pulled over to see if we needed help. It was a couple on their way back from the Alice Springs truck show and as fate had it one half of the couple was a mechanic. 2 hours later the radiator was out, plugged up, back in and full of camper water. We were back on our way and very impressed with the random roadside service. As we made our careful way to Alice on the bitumen the tailpipe gave up the ghost and needed seeing to and 2 legs of the old roof rack finally decided that the spare tyre was too much and parted ways. We were still laughing as we pulled into Alice and started looking for another mechanic.

Whenever we go on holiday something goes wrong. I don’t think that a perfect holiday is possible and, really, I love it when things happen that make you remember that place or day forever. No 1 son will never forget the town of Burra where he found what appeared to be a real human skeleton in a dusty box in an old junk shop. No 2 son always says ‘I didn’t like the ants’ when asked what he thought of Ayres Rock after an ant climbed up his jeans and bit him on the leg while we were admiring the rock from the track.

Perfect is not fun. Disaster is memorable. The people at Wilsons Prom have one of the best holiday stories they will ever get now!