We all know that people will do anything to be fashionable don’t we, and each of us has probably been guilty of wearing something silly in the name of fashion.

Generally, the worst case scenario in these silly fashionable choices is a twisted ankle or unpleasant chafing. Unfortunately for the girls in this article from 1911 their choice of clothing resulted in death. 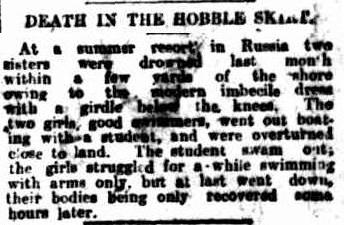 During a holiday at a summer resort in Russia the two sisters were boating with a student just a few yards off the shore when they capsized.

The other person in the boat made it to shore, but despite being good swimmers and so close to safety both of the girls drowned.

What was this deadly fashion you ask? Belted-below-the-knee hobble skirts. Not really suitable boating attire is it?

I wonder if anything else contributed to their drowning. I mean, if you really are a good swimmer surely you could channel the Little Mermaid and swim a few yards to shore. Maybe the hobble skirts were made from fast sinking wool from extra heavy sheep?

I have done a post about the perils of the hobble skirt before, in 1910 a woman made the mistake of getting dressed in her hobble skirt while she was upstairs. Yeah, you know what happened next… (Go on, have a look at the post, she wasn’t the only member of her family to die unexpectedly…)