We have been having all kinds of weather lately cold, wet, warm, dry…. it’s been all over the place. It hasn’t been too good for drying my washing but it has been good for my plants, and, judging by the activity in the garden and the amount of spiderweb I have walked through in the last few weeks, it has clearly been good weather for those who live outdoors.

Well, nearly everyone who lives outside. We had a few days when the heavy rain never let up, only the strength varied, keeping away the birds who usually arrive for their daily feed. We figured they had found somewhere comfortable and dry to wait it out. Our assumptions were proven wrong when a small group turned up, soaked and hungry…

One look at their bedraggled feathers and it became clear that they had just been hiding in a tree waiting for it to stop, and that no food deliveries were being made to them!

I made the mistake of going out in the rain to put sunflower seeds out on the back verandah for them and this guy didn’t even let me put it down. As I stretched my arm out he jumped onto my wrist and scoffed the handful before any of the others got a chance! I felt so sorry for the poor soggy thing I stayed out in the rain until he was finished. 😀

People aren’t the only ones suffering in the heat!

For the last week or so we have been living through a heatwave here in Victoria and today I realized that we humans weren’t the only ones wishing for it to cool down.

This afternoon the Man noticed a miserable looking King Parrot on the back verandah and thought it looked like it could do with a drink. He found a glass bowl, filled it with water, and I put it out on the ground near where the parrots like to feed.

Shortly after, I took this photo through the glass door. 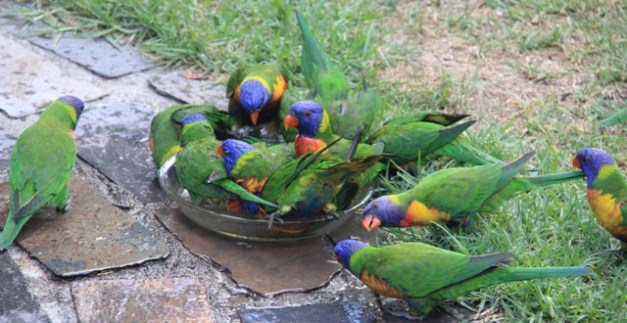 Not enough room in the pool.

A crowd of Rainbow Lorikeets were in a watery heaven, squabbling for position in the small bowl and splashing water everywhere.

It wasn’t long before I had to go out and re-fill it, and when I did in the trees above were the now-cooler Lorries, happily grooming the water out of their bedraggled feathers. 😀

Since we have had the influx of Rainbow Lorikeets into our garden I have noticed that their appearance has changed the behaviour of one of the other regular residents, a Bronzewing pigeon. Not all of them, just one.

The Bronzewings have been here since we moved in. When we arrived there were a terrified few who would blast into the sky at the slightest hint of us through the window.

It was a little self-defeating though, they are so well camouflaged that the only reason you notice them is the fact that they launch into the sky with all the grace of a bag of laundry. If they just stayed still they would be all but invisible!

Over time their numbers have crept up from a few to about twenty and now they are happy to see us move in the house without panicking. They won’t hang around in the garden while you are outside like the parrots do, but at least they don’t make a mad dash for freedom for the smallest reason.

With the regular attendance of the Rainbow Lorikeets there is always a bit of seed spread in the grass and one of the young Bronzewings has clearly developed a taste for the seed and the company.

This Bronzewing has proved to be a little less delicate than its brothers though. If there are pigeons and parrots grazing at the same time usually the smaller parrots rule the roost and push the pigeons around in an attempt to get the best spots. This pigeon however, has developed a behaviour that has shown it is not willing to be pushed around. 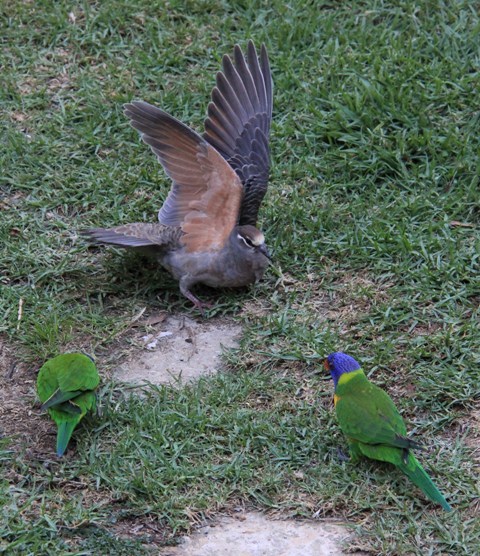 While they are grazing a parrot will move closer in an attempt to move the pigeon on. The pigeon will then raise one or both wings and stand up as tall as possible as if to say “Back off mate!” The parrot will move away and grazing will continue. Each time a parrot moves in the wing goes up and the parrot back off.

This was working really well for about a week and then the parrots must have decided that they would push the point. The pigeon had to up the ante.

Now the wing goes up, but if the parrot doesn’t back off in good time the pigeon bounces a few inches up into the air with a snap of the wings and a cracking flick of the tail in the direction of the parrot. The parrot backs off and the pigeon bumps back to the ground and resumes feeding.

If there is a particularly resistant parrot I have noticed that the bounce into the air is finished with the pigeon landing heavily on top of the parrot. Having what must seem like a giant feather pillow landing on your head would probably cause you to relinquish the dinner table too!

I wonder if a few generations down the track the Bronzewings will be dominating the garden, and the wary parrots will be dashing in to snatch up a few crumbs when they aren’t looking! 🙂 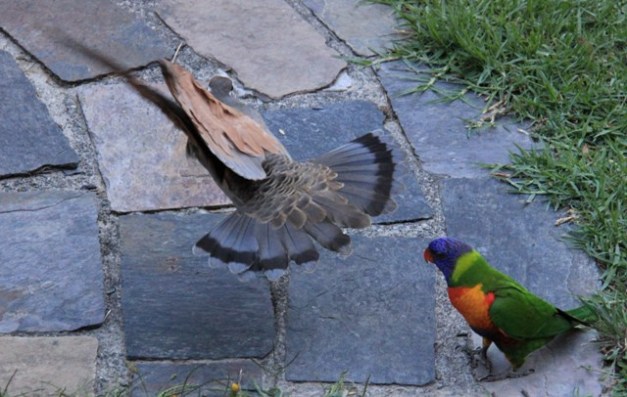 I have done a few posts recently about the Rainbow Lorikeets (i, ii) who have started visiting our garden.

On Friday the kids and I were called over to the back window by the Man to have a look at some new additions. On the grass, squabbling with the large crowd of Rainbow Lorikeets were two parrots who, although slightly smaller, looked very similar in shape.

Instead of having the bright blue head they were totally green with feathery yellow scales showing on their chests.

Unsurprisingly these parrots are called Scaly Breasted Lorikeets. Since that first sighting they have joined the regular crowd and are often seen battling for prime seed spots with the bigger, and equally assertive, Rainbow Lorikeets. 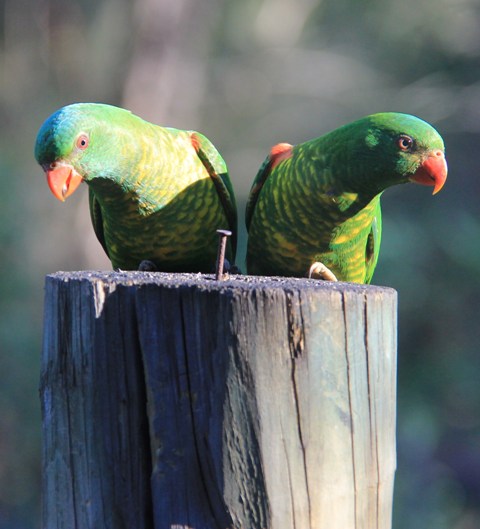 This parroty crowd can be unbelievably noisy at times although they seem to be their own worst enemy.

Last week there was a period in one afternoon when the crowd was larger than normal and as such were extremely loud. They started flying out of the back garden, circling around the front of the house, then landing back on the grass. They would eat a few seeds then do it all over again. This went on for about 10 minutes and was driving us crazy!

I go up to see what on earth they were doing only to see a Brown Goshawk coming into the garden so fast it was as though it had been shot out of a cannon! I guess the Goshawk was hanging around nearby waiting for its own chance to eat and that was what was keeping the Lorikeets on the move.

Of course once it had made such a serious, although unsuccessful, attack the Lorikeets were gone for the afternoon. The Goshawk hung out in the trees close to the house for a few minutes and then disappeared. I was disappointed that I couldn’t get a photo of it but I was glad it didn’t hang around to feast on one of our dinner guests!

I did a post recently about a few Rainbow Lorikeets who appeared to have moved into our garden and I thought I would do a follow-up on them.

In the beginning there were only six of these brightly coloured critters hanging around and they came and went at random.

I wasn’t too pleased about the attention they were giving to one of my tomato plants out there but I was enjoying seeing them so I just let the plant destruction go. 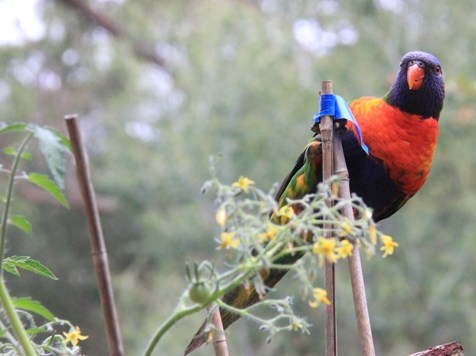 Well, here we are a few weeks later and they are still hanging around. Not just a half-dozen anymore though… Yesterday I counted 32 squabbling out there!

Number 2 son has become something of a bird whisperer, in the morning he goes out in his dressing gown with a bag of seed, makes a few high-pitched squeaks into the garden, and throws a couple of handfuls of seed out into the grass like he is feeding the chooks. Within minutes they are flying in from all directions to take over the garden.

After school the process is repeated, another few handfuls in the grass and the birds descend for dinner.

They are so noisy and I can see that I will never get a single tomato off that poor plant, but because they are beautiful they are getting away with murder!

We have had a flock of unusual visitors haunting our garden in the last few days.

One afternoon the kids were noisily riding their bikes up and down the driveway (one was a zombie, the other a brain; the chase was on!) when I was told to bring my camera and follow RIGHT NOW!

One of the native cherry trees along the driveway had half a dozen Rainbow Lorikeets feeding on it. Surprisingly they were completely relaxed about us wandering around underneath and pointing at them.

We get a lot of parrot visitors here but haven’t had this particular type before. Rainbow Lorikeets are a common type of parrot in Australia but our garden usually has a large and hungry family of King Parrots hanging around. The smaller lorikeets would be silly to get between them and their seeds that’s for sure!

I put a few handfuls of sunflower seeds on the back verandah for them (that seems to be the preferred treat for parrots around here) and wondered if they would stick around.

Within minutes they had realized there was an easy feed in the offing and were vying for the best position at the biggest pile of seeds. They have been back each day for a meal and are very photogenic!

Unfortunately they have poked holes in a few of my ripening cherry tomatoes on the verandah too. Oh well, I got a blog post out of them so it might be a fair trade (as long as they leave them alone from now on!) 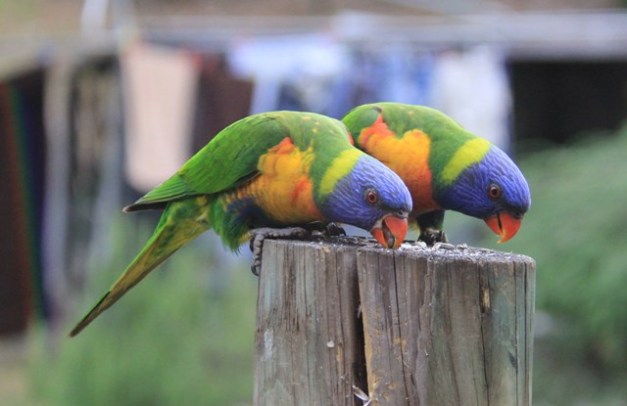