Yesterday’s post was all about my veg garden so I thought I would share one of the things that are growing in the bit of the garden that does its own thing.

I have done posts about the sundews in the garden before but I never tire of looking at them so I am going to force them on you again. 😀

A wander up the hill the other day revealed that in some sunny places there are groups of sundews growing together like tiny, sticky, forests. Usually they are quite spread out but each year they are growing more densely.

Judging by the amount of bug corpses trapped in their sticky tentacles they are all eating extremely well too. Some of the spots were growing so thickly they had even managed to catch leaves that had fallen from the gum trees!

If I can just keep The Man from mowing up there for a few more weeks they will get to finish their season unmolested, and who knows what next  year might bring! 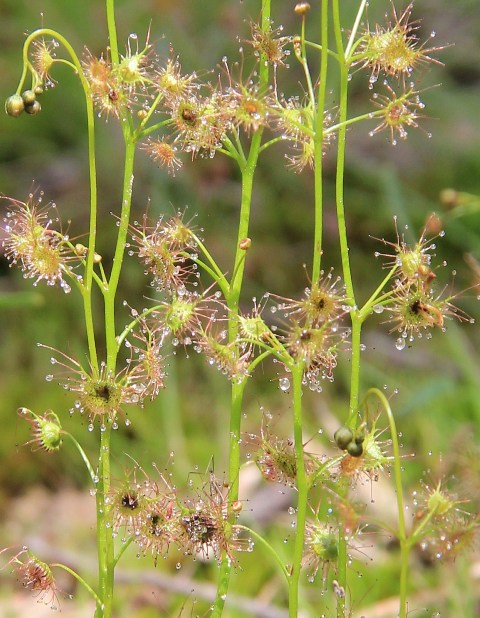 Over the weekend the Man and I spent more time working on our soon-to-be apple tree beds.

The soil on our block of land is not very plant friendly, it is sloping and mostly composed of clay doing its best to mimic concrete. NOT helpful when all you want to do is dig a hole and stick a tree in.

For some reason, which seemed very logical at the time, the Man and I decided that the steepest part of the garden that runs along one fenceline would be the best place to put our new fruit garden. Hmmmm… that means lots of pine sleepers, heavy-duty uprights (expensive!) and stump digging. Did I mention that there are already a handful of bedraggled old ti-trees growing there?

Well, after two full weekends of work we aren’t anywhere near finished but have two high beds built and between them a low bed for other things like strawberries (we haven’t decided what will go in there yet). My arms are also very tired from digging in fertilizer!

While we were grubbing around we disturbed heaps of different critters. Some that made me say eeek!, and there was one scarily long hole that would have easily fit a broomstick in. My digging followed it along for about six feet and I was very glad that I didn’t need to keep on digging and find out who was living in it.

After coming across these critters alongside the beetle which they will morph into I couldn’t resist taking a photo. Thanks to Number 1 for holding them for me and only dropping the beetle once. 🙂

I think these guys are the larvae of Passalid beetles but we call them curl grubs. They have large pincers at the front of their face that look like they could give you a nasty nip, but the worst they will do is have a gentle taste of your hand. If you were a piece of rotting wood you would be in danger but clearly they don’t have the taste for flesh… 😉 Anytime we are digging here we constantly come across them, most people have worms, we have grubs! 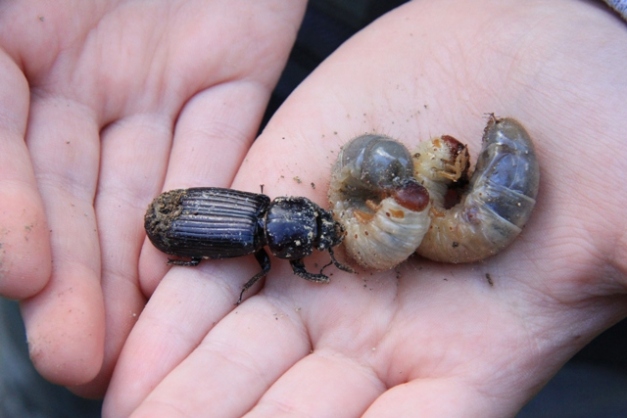 I wish they were worms!