Last night we drove to The Living Desert, a park about 12km out of Broken Hill. It has a nature trail and a walk to the top of a hill where you can see a series of sandstone sculptures carved by artists from around the world in 1993, each with their own story. We planned to go at the end of the day to see the sun set hoping there would be a nice view from it.

We arrived there about 5 (the gates shut at 7) and decided not to drive directly to the top, but to drive around and park at the bottom of the hill, and walk up to the sculptures. That was a big mistake.

The walk winds around the stony hill and through a multitude of indigenous plants giving great views at every turn.

By the time we reached the sculpture garden at the top we had seen beautiful rocky outcrops, amazing views and quietly watched emus walk through the bushes while a group of teenagers stomped past, completely oblivious to them on their quest to get to the art.

No sculpture could outdo the natural beauty we saw on the way up there so when we arrived to find a crowd oohing and aaahing over what I thought were mostly average pieces we were distinctly underwhelmed. Some were good, but they were the ones with the largest amount of admirers and the hardest to see.

My apologies to those artists who had obviously put a lot of effort into their sculptures, including one who injured his hand badly while there, and whose piece had to be finished by a group effort, but I know what I like…

We did a turn around the sculptures, dodging the other visitors all the while. After re-grouping we decided that we would be more entertained by walking to one of the spots we had seen earlier, making ourselves comfortable, and watching the sunset in peace.

We wandered down the hill and found a nice spot to watch the shadows lengthening in the distance. Of course, once the sun had sunk to acceptably low level we realized we had no idea what time it was and from our vantage point we could see that our car was the only one left in the carpark. Eeek! We zoomed back to the car and made it out before the gate shut… phew! It would have been a cold night out there, that’s for sure!

We went for a wander through the main town of Broken Hill today just to have a stickynose around. It is one of those typical old towns with hugely wide streets that wouldn’t be too hard to imagine lined with horses and carts, and with an old pub on nearly every corner I could just about see the streets thronged with thirsty miners. 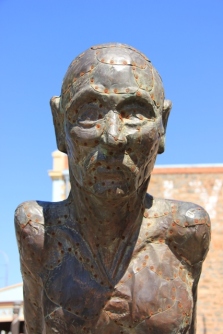 It is a place that loves its art too, there was a small art exhibition in the town hall we stopped in to see, and there are sculptures in the main street. Just out of town is ‘The Living Desert’, an outdoor sculpture exhibit that we are planning to see tomorrow.

The Broken Hill Regional Art Gallery is the oldest regional art gallery in NSW and was established in 1904. I’m not sure how many other galleries it has to compete with for that particular title though….

The eccentric artist Pro Hart was born here, and the Pro Hart gallery is still here.

You Aussies will remember Pro from those long ago Stainmaster carpet ads, “Ooooh Mr Hart! What a mess!”. Fortunately for the town hall cleaners, the art we saw in there today was of a much more traditional kind!

The well-known Australian painter Margaret Olley died on the 26th of July.

In 1948, at the beginning of her career, William Dobell’s portrait of her won the Archibald Prize. This year, fittingly, the prize was won by a portrait of her painted by Ben Quilty.

The director of the Queensland Art Gallery predicted an outstanding future for the 26 year old Margaret Olley in this newspaper article from 1951. I think he was right. She was finalizing paintings for yet another an exhibition right up until her death on Tuesday night, aged 88.