I haven’t written about sea monsters for a while so when I found this article I just had to share it with you.

In 1922 a ship steaming along the west coast of Africa found itself entering and area where a terrific battle seemed to have taken place.

Captain Poole described what he saw;

“The sea was for miles blood-red; it took over an hour to get through the battle area. On the surface were some hundreds of whales all of them having suffered in the struggle. Some were just able to move slowly along; few, if any, could move quickly.”

None of the sailors knew what had caused the carnage, but suspected that the whales had been attacked by swordfish.

Can you imagine what it would take to cause such a massive and terrible scene? Miles of blood-red sea and hundreds of dead whales is certainly a sight that would be hard to forget.

I am not sure if whales and swordfish are usually deadly enemies though, I thought that only sharks or killer whales attacked whales.

A little more looking around and I found an article from the Wanganui Chronicle in New Zealand from 1908 about a battle witnessed by sailors between a swordfish and a whale with a calf.

After much thrashing about the whale managed to use its tail to stun the huge swordfish who was then hauled on board the nearby boat and taken off to Auckland to be frozen.

I wonder what kind of horrific battle (sharks, Orcas, swordfish….?) there was to have left such carnage in the path of Captain Poole’s ship. Imagine if they had sailed through the area a little earlier and been caught up in it. Perhaps there would have been no-one left to tell the tale…..

I am going to bore you today. Please make yourself comfortable while I clamber up on my soap box and prepare my notes….

I am sure we have all seen the photos and video of distressingly emaciated children and blank-eyed adults in the canvas-walled field hospitals of the Horn of Africa at the moment. I am the right age to remember the famine in the 80’s that gave a select group of rock stars plenty of air time to tell us how much they cared and wanted us to help. They are still rich, some massively so, and people are still starving in Africa. Things never change. 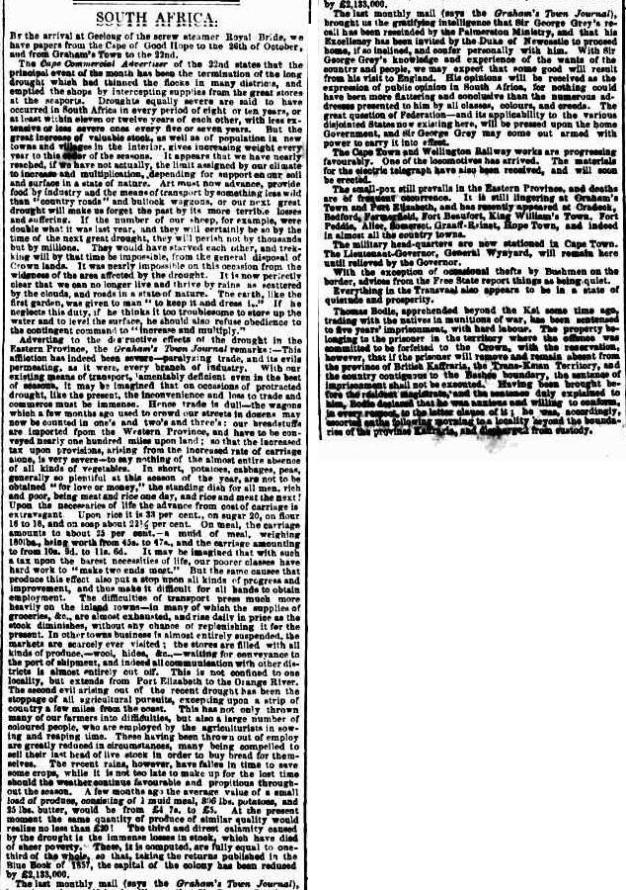 In 1859 this article acknowledged the fact that drought was a regular occurrence in South Africa, suggesting a severe drought occurred every 8 – 12 yrs and less severe ones every 5 or 7 years. That suggests there are more dry years than wet years, and I think it would be safe to assume a similar type of cycle occurs elsewhere in Africa.

I am aware that there is a world of difference between the Horn of Africa and South Africa but, clearly, as this article tells us, conditions that make life hard in Africa are hardly a recent development. It wasn’t hard to find a multitude of other articles of a similar vintage referring to famine in other parts of Africa, for example;  Algiers in 1868 and Zambesi in 1863, George (Western Cape) had no rain for four years as reported in 1862 and in 1903 a summary of cable news reports on the scarcity of water retarding the British expedition in Somaliland. Why is it then, when this was known so long ago, are there still so many people suffering?

The 152 year-old newspaper article above points out that the land can only support so many and, due to the increased load of stock and humans, may have already exceeded the amount it can handle. It also suggests that unless this is addressed, and the infrastructure is improved, these circumstances will continue, and the suffering of the people will only escalate in future. Surprisingly for the time, this article even uses the bible to suggest people who think it is too troublesome to store water and don’t ‘keep the land and dress it’ should not ‘increase and multiply’. Parts of Africa have the highest population growth in the world. How many people are supported by the same amount of land that was struggling to support their less-numerous ancestors?

Added to the growing population, the fact that much of Africa is a place that is constantly under pressure due to unrest, poverty and lack of infrastructure, makes the slightest variation in weather conditions a potential disaster for those least able to cope with it. These people need education in order to help themselves, no amount of food drops and overworked doctors are going to solve their problems. Thousands of starving Mombassan locals were being given aid in 1899 and today aid is still flowing through Mombasa, although considerably more than thousands are dependent on it now.

What has changed? Nothing. Hearing that this famine is the worst for 60 years as I have seen reported in some media, is an irrelevant fact. The life expectancy for most Africans is, tragically, less than 40. Very few people who survived that famine will still be with us today. You can’t learn anything from something you didn’t experience. The problem with food aid is that every dollar spent on it is a dollar that can’t be spent on developmental aid. It is wrong to let those that are currently needy suffer, but feeding them means their children and grandchildren will still be receiving aid and not helping themselves. No, I don’t have a solution and I am not going to pretend I know enough about Africa to tell you whose fault it is, or whose responsibility it is to fix it. My point is, if drought is a new thing people are allowed to be unprepared for it and not know what to do. We can’t blame the popular evil of climate change for any of the past droughts or the current situation. I know it is not a popular view, but uncontrolled population growth, anywhere in the world, is only going to contribute to the hardship of the existing people.

I wonder if there will ever be a change in the situation in Africa or if the cycle of famine and aid will continue indefinitely, with already dwindling public donations causing the aid efforts to become less and less effective. The eventual outcome of this course of events is a terrible thing to contemplate. What can we do to change this? What can they do to change it?