The Tom Cole collection. Well, the bits I have found anyway…..

If you read Buried Words and Bushwa regularly you might remember Tom Cole. I have done a few posts before about this Northern Territory bushman and his unquestionable blokey-ness.

We first met Tom in 1937 when he was surrounded by 50 miles of floodwaters, 4 ft deep. It was Easter, and instead of coming back later Tom had a boat drop him, his supplies, saddles, tobacco, whiskey, and portable gramophone off on a small platform to wait it out. He was also surrounded by my imaginary crocodiles waiting for him to roll off the platform in his sleep….

Later we caught up with him in 1938 when he wandered into town a little the worse for wear, but not complaining. He had survived three accidents in three days and might have had a bit of a whinge when nobody was around of course, but as any self-respecting bloke would say, “I’m fine, nothing to see here”.

Then we travelled back to 1937 and discovered that Tom had managed to find an unusual offsider. He and a barber named Samuel Delaney were going on a trip into the wilds.

We weren’t sure how this little trip would go though. We weren’t worried about Tom, clearly he could handle himself, but to travel in the Australian outback with a person whose only noticeable skills are cutting hair and ballroom dancing might have made things interesting….

Lastly we heard about Tom’s plans in 1937 to build a Dude Ranch where budding hunters and sportsmen could stay and kill with all the comforts of home.

Tom Cole arrived in the Territory with nothing and made his fortune on cattle stations. He certainly worked hard for that fortune though!

The reason I was inspired to do another Tom Cole post today was that one of those posts received an interesting comment yesterday from of Tom Cole’s Great Grandson asking if I had any more information about him. Yippee! I love it when that happens! I didn’t have any more information other that what I had shared in my posts but I thought I might go and have a look to see if there were any newly digitized articles about him.*

I found a small article from the Australian Women’s Weekly in September 1950 that mentions Tom Cole and states the he now lived in Sydney and had recently returned from a crocodile hunting trip up north. His interests were listed as “shooting duck and quail for fun, a quiet game of golf and a bit of gardening”. And, I think, woe betide any critters who start munching on his roses 😉

I looked for a new article to share with you but was unable to find any new adventures. For you Tom Cole fans though, I did find this tale on the right of crocodile hunting done the hard way, written by a certain T. Cole in 1949 and published in The Sydney Morning Herald.

Ridiculously skinny isn’t it? Never fear, click on it and it will lead you straight to a much larger version. This resolution was the only way I could get it to fit on a page without being in 3 disconnected parts…. grrrrr. (One of the reasons I alway use small articles in my blog posts!)

It is an interesting story of crocodile hunting with an aboriginal man, Bamboo Charlie,  who paddles out on a paperbark raft made by aboriginal women, lubras, and harpoons a croc after tracking it by the bubbles it leaves as it is watching him…. eeek!

The rest of the hunting party haul the croc in, job done. I think it was pretty lucky Tom lived long enough to make his fortune, I’m sure many others in the same line of work didn’t.

*In my searches I found that Tom (1906-1995) had been interviewed in July 1993, two years before his death, and that the recordings are available for purchase.

I understand the worry these people in Los Angeles had when this strangely smelling gas drifted through their neighbourhoods, but what would you do if garlic scented gas filled your nostrils one evening?

Their response was to jam the lines to the police station with calls for help but I don’t think that I would be calling the police.

I suspect my immediate Pavlovian response would be to dump any plans I had for cooking dinner, call the nearest pizza shop, and place an order for my favourite Pepperoni pizza and a roll of garlic bread!

Hmmm… I wonder if the area where this smell originated was known for its restaurants? Perhaps this was some sort of none-too-subtle marketing tool that got a bit out of control? 😉

A while ago I did a post about a young woman called Ray Walker, who was a lion trainer.

The article in my post was about the time one of her lions panicked during a publicity walk in the streets of East London, South Africa, and injured her.

In order to get the lion to safety she bundled it into a nearby taxi. In the post I wondered about the state of her injuries and we all wondered at the mental state of the taxi driver when he realized who, and what, was on the backseat! 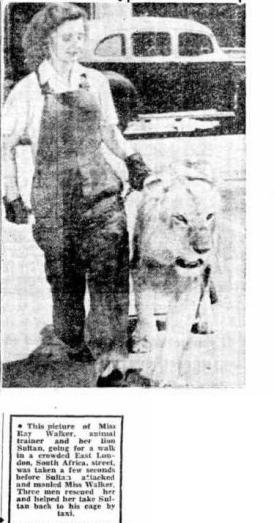 Imagine my surprise when over the weekend I had a comment on that post from one of Ray Walkers offspring!

Apparently the ‘scratches’, as they were described in that newspaper article, were hundreds of stitches and a smashed jaw that needed wiring back together. What an amazing woman she must have been to keep her cool in such a situation!

Of course, you know me, I immediately had to go back to the archives and see if I could find some more articles about her.

You can probably imagine how surprised I was to find this one with a photo of her supposedly taken mere minutes before the lion (named Sultan) panicked.

In this photo Sultan doesn’t look too pleased does he? The accompanying article reports after the incident three men rescued her and helped her take Sultan back to his cage by taxi.

It must have been quite a big taxi to fit three blokes, a woman, and a grumpy lion in it. I wonder if they really rescued her and helped return Sultan or if they just helped her shove him in the taxi? I know from experience that a large frightened animal in a confined space with strangers is not the best idea, and a taxi screams confined space to me!

Apparently the taxi driver was well rewarded for his assistance, financially and with a medal. He probably had to go home and have a heart attack afterwards, not everyone is used to lions at such close quarters! At least he had a good story to tell. I wonder how Ray Walker told the story?

Either way, if a lion’s panic attack happened in a public street these days I think people would be too busy fumbling for their iphones and putting it on youtube to actually help her out, don’t you?

In my travels through the archives I found this great pair of articles about steely nerved bee whisperers from 1949 and immediately thought of that lovely blogger Miss Apis Mellifera.

Elizabeth Street, Melbourne, and Grenfell Street, Adelaide, are both one of the main streets in their respective cities, and the thought of a swarm of bees in either of those locations today is very unlikely.

Even less likely is that there would be a cool-headed member of the crowd ready to wander up to a bee swarm and send the queen on her way. Slightly panicked passers-by armed with iphones though, now that sounds far more likely!

I expect that the ute owner was very pleased that there was someone who knew how to deal with a hitchhiking swarm of bees, otherwise it could have been a very interesting trip home for him, and the bike rider, well, I expect he would have just walked home if the queen in that particular swarm remained elusive!

Clearly the swarm on the bike seat was a calm one. I expect that normally having two men sorting through the bees looking for the queen like that would result in screaming and running. They look more like they are sorting through a pile of change rather than a swarm of bees!

This post is also a quiet thank you to Miss Apis Mellifera for her lovely words and her Bumblebee award. She made my day 😀 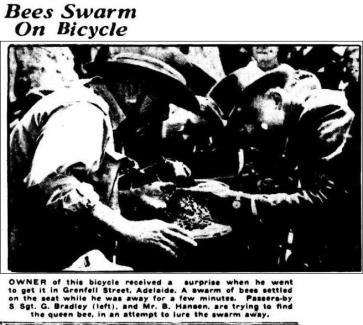 Happy Easter! I hope the chocolate bearing bunny brings you lots of eggs and toasty hot cross buns on Sunday 😀

We will be toasting our hot cross buns on sticks in the flames of a campfire. Our campsite will not quite be looking like this, although I bet it will rain!

See you on Tuesday 🙂 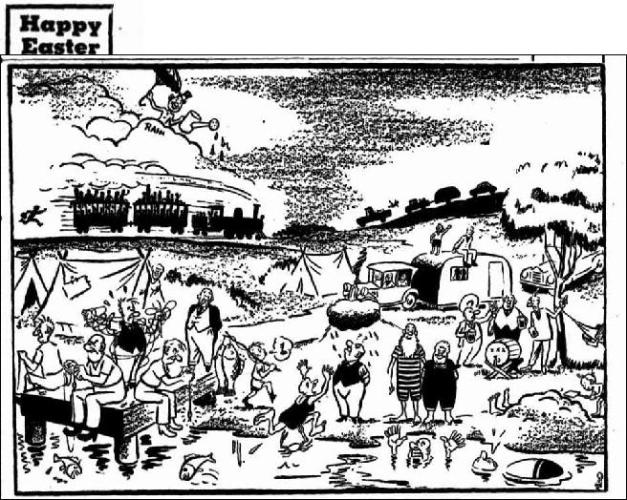 How hopeless were this lot. I have no problem with people not recognising a baby rabbit if they have no experience with them but most of the people making wild guesses in this article should have been a little more knowledgable!

What an amazing range of guesses gathered by the vet Ralph Fogleman trying to prove the farmer Harold Heaston, couldn’t know more than he did. Folgleman didn’t do himself any favours insisting it wasn’t a rabbit.

The professor of zoology, Dr Derbyshire, was the smartest of the lot, saying he wouldn’t care to comment until it had grown up.

I bet rabbit stew tasted a little sweeter every time Mr Heaston had it for the rest of his life. 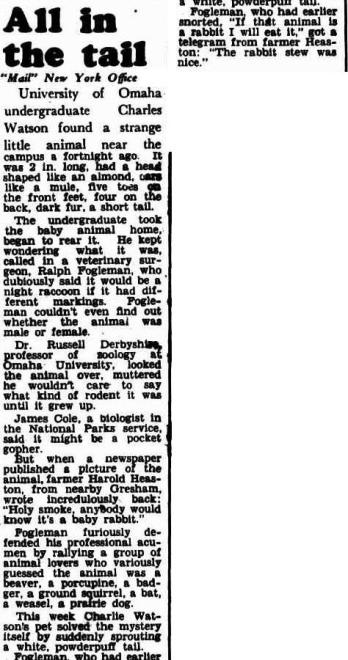