We are in the midst of winter here now, it is getting quite cold in our little valley, and yesterday was the first day it didn’t rain for what seems like weeks.

Fortunately, the weather has taken a small turn for the better and even though this morning you could barely see the other side of the road for the fog the sun managed to break through by 11, I even managed to get some washing on the line. Woo Hoo!

Foggy mornings are my favourite kind of morning, especially when we are camping (and I am wrapped up in a  warm jacket with bacon and eggs sizzling away over the fire of course!)

I doubt the man in the picture below who was driving this cart in front of Flinders Street Station on a misty 1924 morning had the same appreciation for them that I do though!

I wonder if the Argus photographer had to wait for a while for the traffic to clear before snapping this moody picture, can you imagine the Flinders Street of today being so quiet? –>

According to a City of Melbourne website it is ‘the busiest suburban railway station in the southern hemisphere, with over 1500 trains and 110,000 commuters passing through each day. Its 708 metre main platform is the fourth longest railway platform in the world.’

Interesting figures, although I wouldn’t have thought Flinders Street Station could ever be described as suburban, surely you couldn’t get much closer to the city than this! 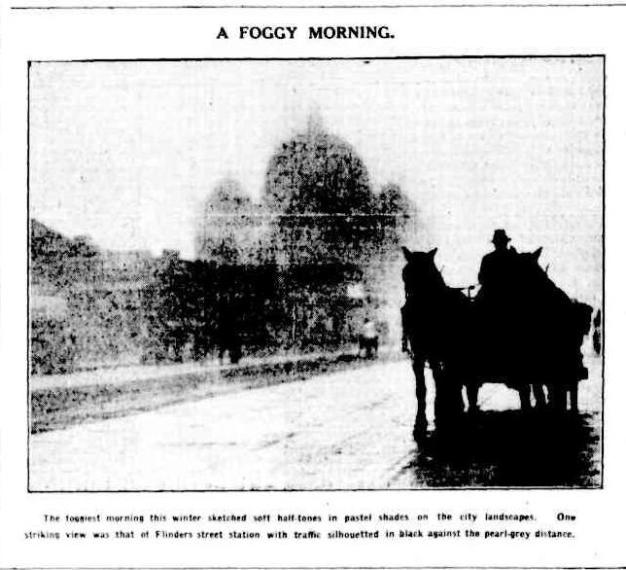 Step away, nothing to see here…..

This lorry crash is a fairly accurate representation of my internet connection today….

See you on Monday. 😀

Here is another long article to keep you squinting for the weekend. This fantastic story of a man-eating plant could well have been lifted from a B-grade horror movie.

In 1924 botanists Joseph Villareux and George Gastron were collecting specimens in a swamp 40 miles from New Orleans when they discovered what they described as the ‘missing link between human and animal’.

Joseph and George had been lost in the swamp for over a week when, after landing on a small island, they came across an unusual plant on the water’s edge.

Joseph made the mistake of trying to pick one of its strange flowers, but was grabbed by the fronds of the plant and dragged towards the stem.

Seeing his friend in danger George rushed to help and was himself grabbed by the tentacle-like creepers. Fortunately, they were both armed with axes and spent the next few hours hacking their way to freedom. There would have been quite a bit of motivation to get away from the beast, the entire time they were hacking away at the tentacles unsuspecting critters were wandering by and being grabbed, squeezed and devoured.

If you are one of my regular readers you know I can’t ever read these stories without picking apart the details the story tellers didn’t think through before they opened their mouths. Don’t ever watch a movie with me 😉

Apparently this fight for life took some hours which makes me think that the speediness of the original attack was a little exaggerated. Not only that, when I go flower picking I am not normally armed with an axe. What kind of flowers did they expect to encounter?!

The furry critters on that small but surprisingly well-populated island who were unfortunate enough to be consumed while the fight was going on must have been a little different from any of the critters I know. If I was hacking away at a plant with an axe for a few hours, I can guarantee that nothing furtive and furry would be strolling up to see what I was doing.

I really wish there was a plant like this in the swamps of New Orleans but…. well, I don’t really need to finish this sentence, do I?

I wonder if Captain Webb was about to auction off a pair of ornamental angels or if this was a genuine otherworldly vision?

If at the time of this amazingly prophetic statement he was gesturing towards some angelic mantlepiece decorations this incident is less remarkable. Of course, if the next auction item was a pair of old boots and he was talking about something only he could see I am definitely interested!

If you have read one of my earliest posts about my failed attempts to grow capsicum you will understand the thrill I had this season when the very first capsicum seedling I put in the ground was soon weighed down by a real live fruit. Ok, the plant was scrawny, and, in reality quite pathetic, but the fruit was real and I had high hopes that one day soon I would have the chance to pick a home-grown capsicum. YAY! You can tell by the way I am writing in the past tense it that all did not go entirely well, can’t you?

Here in Victoria we have had quite an interesting summer weather-wise. Normally at Xmas time we are crippled with heat induced lethargy, but this year we have barely had time to put on the fan and the weather changes, torrential rain, thunder, wind, then as quickly as it rains it is hot and steamy again. Yuck. The vegies have been loving it though, and so has the lawn. My hopes were getting higher and higher the bigger the capsicum got.

Then it was all over. It hailed. I don’t mean frozen raindrops falling in the garden, I mean chunks of ice plummeting from the heavens. The massing black clouds had driven me outside to get my washing off the line when something smacked into the grass at my feet. I picked it up and saw it was a large and misshapen piece of ice. Never a good sign. I ripped the rest of the washing down in record time and two minutes later all hell broke loose. That was the end of my capsicum, and a good portion of my tomatoes too. Bugger.

We were quite lucky actually, closer to Melbourne the ice was larger and far more destructive and I know that people just a few streets away had their cars dented by the hail. Fortunately it appears that nothing here seems to have been damaged. I was still annoyed though. My vegies were beyond damaged…grrr…… It appears to be my destiny to always eat shop-bought capsicum never home-grown *sniffle*.

The Yarra Valley is full of vineyards and orchards so me losing much of my pitiful excuse for a veg patch to hail is nothing compared to what hail does to real crops. (Here is where I should insert a complaint about the local council restricting the use of hail netting on farms because tourists looking out of their cars as they drive past want to see rolling green hills, not actual farming.)

The five feet of hail that fell on the Tweed District in New South Wales in this article from 1924 is one hell of a drop. Any crops that fell on wouldn’t have only been beaten to death, they would have been completely frozen. I can’t believe the hail was five feet deep in the gullies! 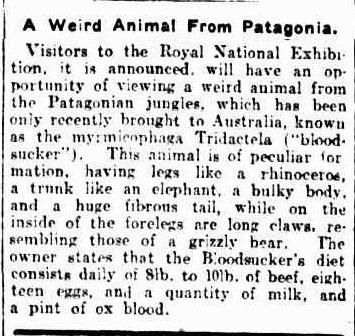 This is a pretty scary sounding critter. Grizzly bear claws, elephants trunk, rhinoceros legs, a huge tail and that diet, ick! Wouldn’t want to meet this animal in a dark alley.

Let me just look up, umm, bear with me just a minute… myrmicophaga…hmmm.

Ant sucker would have been a little more accurate as  Myrmecophaga tridactyla is actually the Greek for ‘three fingered anteater’ (despite the fact they have five ‘fingers’).

This poor giant anteater might have been ‘a weird animal from Patagonia’ but I think the masses would have been just as impressed with an article that actually described the reality of it and not this piece of creative writing!

A trunk like an elephant. Really? A long thing on the front of their face is their only similarity, and a giant anteater has legs like a rhinoceros only in the sense that they both have four, one in each corner.

I am not sure how long the star of the show will last if they really are feeding this (toothless) anteater mainly on beef!