On Sunday it was the birthday of one of Australia’s best known poets, Banjo Paterson.

Andrew Barton Paterson was born on 17th February, 1864, near Orange in NSW. He was not only a poet, among other things he was also a journalist, a war correspondent and a WWI soldier.

Banjo Paterson wrote many poems about the harsh life in the Australian bush, although this one published in The Queenslander in 1901 called A Mountain Station is more amusing than anything else. 🙂

He also wrote some of Australia’s favourite poems, The Man from Snowy River, Clancy of the Overflow and, one I’m sure you have all heard, Waltzing Matilda.

I was looking for a Banjo Paterson clip to add and found this one, accompanied by great images, old and new illustrating the tale of Clancy of the Overflow (with the strains of Waltzing Matilda playing in the background).

The theme of the week has apparently become buried alive. Here is another for you but this one has a less happy ending that the dancing corpse of yesterday’s tale.

If this story is true it is a dreadful way to go. Usually the ‘not quite dead’ stories I find are more along the lines of “and then there came an unexpected knocking from the inside of the coffin”. Even yesterdays almost-victim was an anomaly with his newly returned vigour. 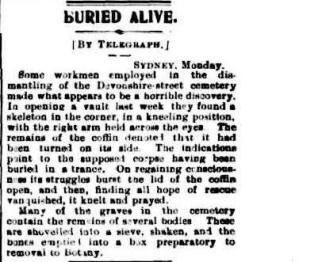 This report from 1901 details a terrible way to spend the last few hours of your life, shut away in a sealed vault after escaping your own coffin and with no hope of help coming.

The bodies interred in the Devonshire Street cemetery, Sydney, were removed in 1901 and sent to another cemetery.

Some workers opened a vault only to find one of the coffins turned on its side and a skeleton kneeling in the corner with one arm across its eyes. The assumption being that the person had only been in a trance and not awakened until the vault had been sealed.

This was clearly reported while the cemetery move was current news. I wonder if it was fact or fiction? I had a look on the internets and couldn’t find anything about this poor unfortunate. It does sound like the kind of tall story told in the pub after a hard week of digging up decaying bodies in the mud, doesn’t it?

“…and then we opened the vault…”

I am hoping that one day someone will read this who has researched the history of this cemetery. If that person is you, please tell us if the tale of this terrible discovery is true or not!

Here in Victoria the most popular football code is AFL. Actually, to the faithful it is more of a religion than a sport.

These days footy is big business with things like endorsements and media opportunities making the stars of the game bigger than ever. In the old days though, the players were just blokes who loved a kick and had jobs on a weekday. (I did a post moaning about that very thing yesterday)

The blokes who played footy back then were real hard men. They worked all week then pulled on a guernsey on the weekend and were never afraid of a bit of rough play. Fans were hugely loyal, you supported the team where you lived.

I was listening to the radio on the way to work the other morning and people were ringing up to tell their tales of Charlie Sutton.

One man rang and said that as a kid he and his mates, like so many others, would play kick-to-kick in a lane at night. Luckily for them Charlie Sutton lived nearby and would walk past on his way home from work. He would always put down his Gladstone bag and have a kick with the kids before continuing on his way.

Another woman said that her grandfather remembered playing a scratch match with Charlie Sutton in New Guinea during the war.

The Footscray Football Club has very loyal supporters. When financial difficulties threatened a merger in 1989 fans rallied to raise the money to pay off the debt. Although it is now known as the Western Bulldogs many diehards still think of it as Footscray.

You don’t have to be a football fan to see the way the culture has influenced so much of our history. Parents and kids still play kick-to-kick at the park and in the street. Stickers showing football allegiances are on the back of cars, kids proudly wear their scarves or beanies to school when their teams have had a success. People put their kids names down for memberships before they are born. Front fences are painted in team colours for that weekend in September.

You don’t have to love footy to love its history.

Here is a clip of some of the 1954 premiership team (including Charlie Sutton) watching a replay of that match in 2009 with a handful of current players.

I have the day off today, yay! It is because I am going to the dentist though, boo 😦

When the Man of the House goes to the dentist for a bit of torture I try to find an article about some dental disaster to share with you. As it is my turn this time I thought I had better find something dentisty as well, sigh…

Fortunately the first thing that caught my eye was not a story of dental horror it was a boys amusing interpretation of why his snapper dinner in 1948 had a small yellow ball in it.

His father jokingly told him it was a lump of gold. This was later proved to be correct by a jeweller and naturally the boy expected that meant the gold had come from one of the fishes fillings.

I also had to include this amusing article about a bit of horse dentistry in 1901 as well. I love the way they explain that the horse was treated ‘just like a human’, with the use of cocaine to deaden the nerves in the tooth before they were filled with either gold or silver. Crikey!

I wonder how popular this drug dealing dentist was with his patients?

Yes, I know that drugs we consider to be problems these days were used in the past as legitimate medicines, it just makes me glad we do things differently today.

It also makes me wonder what medications currently used will be considered inappropriate at some time in the future!

When I was listening to the radio news last week I noticed that you people in the US are still being subjected to an election campaign. You poor buggers.

Australian politicians could never keep us interested in an election for that long. If they tried, all they would find on voting day is boxes and boxes of donkey votes.

We have compulsory voting here, we are a captive and unimpressed audience. We know we have to vote and we know that no matter what they tell us it is unlikely to be true, non-core promises, never-never GST or ‘no carbon tax under a government I lead’ have taught us well.

For example, I noticed in the budget news over the weekend Julia Gillard is going to give every family with school aged children cash payments to help with school expenses.

Really, all that does is make us suspicious of whatever else she is up to. We are happy to accept this unearned windfall, but we are no more likely to vote for her. And no, we haven’t forgotten about our electricity bills going up massively, thanks to you Julia.

We are nowhere near as passionate about our politicians as people elsewhere in the world. Really, they just need to do their best not to annoy us if they want our vote. Of course, incidents like this one from 1901 would have a far better chance of keeping the electorate interested…

Upon the death of a politician named Mr Murray Hall in 1901 the attendant physician was startled to find that Mr Hall was not a Mr at all.

I love these old stories of Misters that turn out to be Mizzes. It would have been quite an extraordinary thing to have lived that life back then.

I am sure that many women have wanted to live differently throughout history, but to actually go against every expectation of society and do it would have taken considerable strength of mind. It still would now, but is far more socially acceptable today than back then. It wasn’t that long ago when walking the streets in gender-inappropriate clothing would see you arrested.

Can you imagine the scandalous gossip doing the rounds in 1901 after his true identity was revealed? I think it would be especially scandalous in the case of a Mizter* that has been married to another woman. I often wonder if the wife (or in this case wives) knew the secret or if they were innocent as to what the difference between man and woman was? A wedding night with a new husband could come as something of a shock, couldn’t it!

*Mizter definition – A woman secretly and successfully living as a man. You heard it here first people. 😉

A Battlefield Covered With Mummies. 1901.

Imagine the horrifying sight this battlefield would be if you came across it. Thousands of bodies, as far as the eye can see, lying on the battlefield just as they were when they fell so many years before.

When I looked for a bit more information on this epic battle I found that the numbers of casualties might have been exaggerated slightly….

The Battle of Tarapaca took place on the 27th of November 1879 and was part of the War of the Pacific (1879-1884). The area of Tarapaca is one of the driest places on earth so I can’t imagine that a battle there would be the first choice for any army.

I love the way this report described the war as ancient history, it was only 22 years earlier!

I’m having a little trouble with the article though. Bodies still lying around just as the day they fell? No scavengers at all?

I can imagine that scavengers might be a little thin on the ground in such a dry place, but no matter where you are there is always something that nibbles away at anything that stays still for long enough….

If you have ever been to the place where the Battle of Tarapaca took place, please let me know if I am wrong though!

If you would like to read more about this war have a look at Andean Tragedy or Wikipedia.