On the eve of ANZAC Day I thought this article was worth sharing with you.

An 82-year-old digger had his 13 Korean and Vietnam service medals stolen when his house was broken into on Monday while he and his wife were out.

According to the Herald-Sun

“Police officers at the Cabramatta command on Tuesday decided to chip in to have a supplier recreate the full set of medals in time for the digger’s Anzac Day appearances at the Sydney dawn service and his local RSL club.”

The police then surprised him at home with the medals on Wednesday.

What a wonderful thing for the police to do! (and the supplier to do it so quickly) 😀 Even though the medals aren’t the real thing I am sure they will still be special to him. Hopefully his real medals will be recovered soon enough.

I just read this article on ABC News (Australia) and thought I would share it with you.

“My name is Latifa. I am Colonel. I am an active helicopter pilot in the Afghan Air Force.

I wish to become a very good pilot and train other women to become pilots.

I have a five-year-old daughter who has been flying with me since she was two months of age. This is because there is nobody to look after her in the Air Force. I am trying to convince them to have a kindergarten, so women can be calm and do their job very well.

My message to other women in the world is that they should work hard to achieve their goals. They should be ambitious and have confidence in themselves. They should stand by Afghan women and share their experiences with Afghan women.”

The struggles that Latifa and her sister, Laliuma, went through to get the education they wanted, let alone rise to the top of their profession as they did, are astounding.

Read the article, it will make you feel even luckier that you have the life you do.

Recently I have  taken up a new hobby and I am going to share it with you.

We love to go camping out in the bush here in Victoria and no matter where we go there will be traces of people who lived there long ago. We always find broken bits of china, glass and scraps of metal that show that people didn’t just wander through on their way to somewhere else, they actually lived in that place for a time.

These fragments of habitation are so numerous that Number 2 son has amassed quite a collection of small china pieces, bringing them home to be carefully cleaned with an old toothbrush. He has become so well-known for this collection that friends and other campers in our group will save bits they find in their travels for later delivery.

We always wonder how the items of crockery managed to make their way out into the middle of nowhere and how they were broken. Was there a mischievious child who knocked it off a table or were the tired hands of a hardworked woman responsible? Of course there could have been an annoying husband whose head it was aimed at too! I would love to know the stories behind their existence.

This interest in stray bits of lives lived long ago has led to our bathroom window ledge starting to collect old bottles*. It is not often that we come across intact ones in our travels so I have little hope of expanding my collection by serendipitous means, but this post is about my favourite, and the most battered, member of my collection, and the one who started it all.

It is a milk glass cold cream jar, probably from the early 1900’s (please correct me if I’m wrong someone!), about 7.5cm tall, still with its crumpled lid. The reason it is my favourite is the story behind the finding of it. 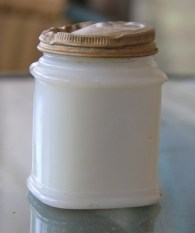 This photo is of the best side of the jar, the side you can’t see has a crack in it, it is certainly not in collection-worthy condition, but I love it anyway.

When we went to Alice Springs in 2010 we spent hours driving out to a cattle station to spend a few days camping. Luckily we went in the off-season so the 3,000 sq kilometre property was completely empty. (The couple who managed the station needed to go to town for some shopping so we really were the only ones there for a few days.)

It was a great place and we spent every day following tracks in our 4WD just to see where they went. One afternoon we parked on a track on top of a hill to wander around and admire the view.

As I walked down the hill from the car to look for some more photos I noticed a remarkably smooth and brilliant white stone set into the tyre track of the road. I carefully prised it out and was amazed to find that it was not a piece of quartz as I was expecting, but this jar. We had driven over it, and I guess from the state of the track, and the jar, we were far from the first. I put it in a small bag and packed it carefully away in  the camper to clean up when we got home.

At the time we were about 150kms from Alice Springs. The photo below was taken mere steps from the jar just before I found it. There were no other people as far as the eye can see and probably for many hundreds of kilometers after that either.

Who owned this cold cream jar? Where was she going? When was it that she (I am not sure how open men were to face cream back in the day so I am going with ‘she’ for now) noticed she had either lost it in her travels or run out and tossed the empty jar away? Had this poor jar lain out on that track in the harsh Northern Territory weather for around 100 years?

We were quite far enough away from cosmetic shops in 2010, can you imagine how much further away they felt in the early 1900’s? What a story this jar could tell, although I expect it would be an exciting beginning with a veeery long spell of waiting around… 😉

*Thanks to EllaDee for sharing her bottle cleaning recipe. I admit that I get a great deal of enjoyment when the volcanically bubbling reaction takes place in a bucket in my laundry sink 😀 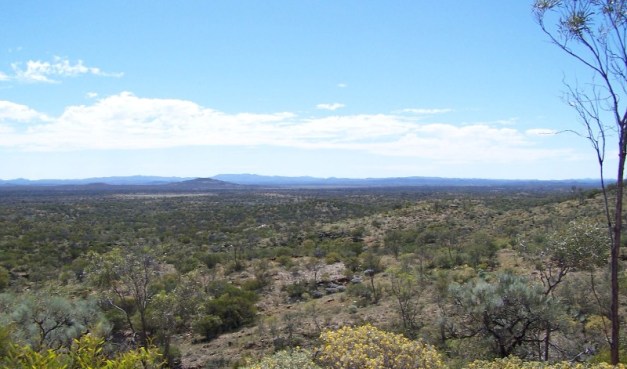 Fashion is a huge part of Cup Day and the Spring Racing Carnival, and, although I am not much of a fashion lover I am always interested in the hotly contested fashions Fashions on the Field.

Why, you say? Well, because the one who wins isn’t flaunting a frock from a famous designer, it is usually won by an imaginative person who spent hours making their own dress or adapting a pre-loved frock to their own design.

This year it was won by 22-year-old Amy Robson(Herald-Sun), whose grandmother helped her hand paint the myriad beads on an op-shop (thrift shop for you in the U.S.) handbag and turn it into a peplum that was the feature of her dress. Yeah, I had to look it up, don’t think for a second I knew what it was.

Fashions on the Field was started in 1962 with generous prizes to encourage more women to go to the races. If only the VRC had what they were unleashing when they decided to make fashion a big part of the Spring Racing Carnival!

If you are interested in more about the Fashions on the Field melbournecup.com has an interesting decade by decade breakdown.

Sorry, that is the first headline that came to me after I read this news article today.

After 15 years, British farmer and Spitfire lover David Cundall has finally found the dozens of buried Spitfires he has been searching for at former air bases in Burma.

The planes were buried, unassembled, in their crates during World War II to ensure they wouldn’t fall into Japanese hands, remaining there for around 70 years, and are expected to be in near-perfect condition.

Apparently there are only a few dozen still left flying and now they expect to dig up around 60 more of them. I know that anyone who owns a Spitfire will not be too concerned about its resale value, but I imagined that now they aren’t quite as rare as they were a few days ago there might be a couple of disappointed owners!

I know that there are people who believe there are similar treasures that were buried or hidden after the war, not Spitfires, but caches of motorbikes or jeeps. I am sure that a story like this will make them very excited 😀

I dare you to try this beauty cream!

The Man and I have been watching ads for this beauty cream for the last few days and laughing each time they try to tell us how good it is. When it comes to advertising we are cynical people who will never be sucked in by any products dubious claims of instant youth, but I find it hard to believe anyone would ever buy this story.

I couldn’t believe it was a real product the first few times I saw it and then I wondered if anyone has ever bought it. If so, did they really listen to the ad?!

This is not the same as the commercial we have been watching, ours has had far less reference to the magic ingredient, but I liked the way this one is out and proud in explaining that snail gel is the thing that will give you beautiful skin.

In this ad all of the users are busy smearing on the cream out in the garden. I wondered if they could hear the crying all of the other bereaved snails hiding in the plants? Perhaps they were just squeezing out another hapless snail to fill the jar afresh for each shot….

As always, if there is someone out there who has used this cream and their facial shell has miraculously healed, just as the shell on the snail in the ad did, please let me know. Until then I will assume it works as well as snail slime normally does when I squish one of the little buggers who is eating my veggies. They are still just as busted the next morning, even when they have spent the night lying in a puddle of that miraculous slime.