This Sunday, half of the parents across the country will be hoping for breakfast in bed and to be showered with gifts, yes, it’s Father’s Day.

You can tell it isn’t Mother’s Day, bins of discounted socks and car wash gift packs confront you in every shop. Don’t worry the kids and I have managed to resist such blatant marketing.

Fortunately, we have also managed to resist buying anything actually dangerous. Unfortunately the sons of Frank Roots of Ohio didn’t really think through their gift back in 1953.

They got their dad a two-foot alligator for Fathers Day…

That can’t go well, can it? I have to say that Frank took to their present more amiably than you would expect, tickling its tummy. Obviously the alligator gift wasn’t wrapped tightly enough, and what should have been a happy Fathers Day ended in hospital with a nipped nose. Thanks for nothing, kids!

What would we do without our dads? I for one would have never been introduced to science fiction, giving me a love of it that has never left.

I was taken to the cinema to see Star Wars at a very early age (the Wampa gave me nightmares for years). Since then Dad and I have seen every movie in the franchise at the cinema together, not all of them have been good, as we all know, but the tradition remains.

Because of our shared love of sci-fi the rest of the family had to endure watching those cheesy seventies sci-fi television series, Star Trek, Buck Rodgers, Battlestar Galactica, Land of the Giants…. oh, there were so many!

For flashback purposes and your (very dubious) pleasure, here is the intro to Buck Rodgers in the 25th Century. So cheesy, I can almost hear the mice….

And of course my personal favourite, the classic Battlestar Galactica;

Happy Fathers Day to all you Dads out there. Have a great day. 😀

Cows on the inside. A cautionary tale.

I quickly scanned through the first two-thirds of this Peculiar Discovery in a Boys Stomach tale from Boston in 1896… hmmm, kid, unhealthy diet, unexpected death…. no surprise….

Then came WHAT THE…??!! and I went back to read it properly. 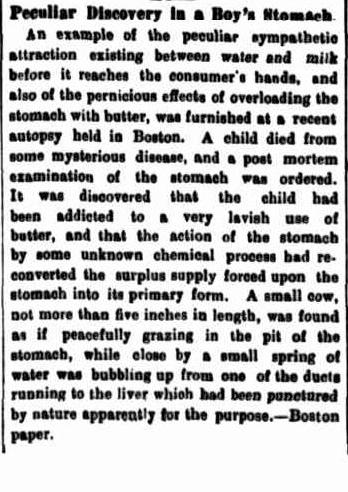 A diet heavy on butter creating a five-inch cow grazing deep in the pit of a child’s stomach?

Do you think there is any way the suggested terrors of this cautionary tale would change the behaviour of a small child?

Ok, I’m sure that there are a few children out there who would have nightmares about the tappy-tap of tiny internal hooves, and only being able to communicate in moooo, who will be sure to eat dry toast for the rest of their lives.

Nevertheless, if I was to tell my boys to take it easy on the butter otherwise they might end up with a miniature pet cow in their stomach their little eyes would light up!

Well, they would probably roll their eyes and say “Mu-uu-um” but, you know, if they lived in a less informed time, like 1896, I’m sure they would believe me. 😉

I wonder who the gluttonous child was that this article was directed at? The greedy sprog of an editor who had tried everything else and failed to slow the chomping? This is really something all parents would like to have access to isn’t it? The spreading of your own myth to control the children. I wonder if it worked?

I love the little additional detail of the spring of water helpfully supplied by a hole in a liver duct. I guess even imaginary stomach cows have to drink… Ewwww…

All The Single Laydeez.

On Friday I did a post  talking about the kids being struck down with the dread lurgy that has seemingly taken over the entire valley, and finished with a clip of The Pigs singing Sofa People.

Now, I’m not a country music fan and neither are many of you. Nevertheless, if you can’t get a laugh from watching The Pigs…. well, you just should, orright?

For those of you who did enjoy the utter silliness of The Pigs here is another clip (lets face it, when am I going to get the opportunity to post about them again?) although I am going to add a warning.

No, it isn’t to look out for the barely stifled laughter of the line-dancing girls, nor is it to warn of the unexpected appearance of the legendary John Williamson on jaw harp.

The problem is that since I first heard this version of Beyoncé’s Single Ladies I have never been able to hear hers again without the country twang of The Pigs overriding all thought processes.

Watch it at your own risk. I’m still humming it… 😀

Time to myself- zero.

Clearly there is Something Going Around as I have had one sick child home from school each day this week.

As mentioned in my previous post Number 1 son was home for the first two days before managing to crawl back to school on Wednesday.

Just as well he recovered, because after picking up a victorious Number 2 son from a basketball round robin on Tuesday (victorious, but in a state of collapse), they switched places and Number 2 has spent much of the remainder of the week in a fevered sleep on the couch.

Of course, if the Man catches this variety of plague I may well have to resort to extreme measures to deal with him because I’m all outta sympathy. 😉

As I have had no time to myself this week and can’t think of anything intelligent to write, I had to share this clip which, appropriately, includes a couch funeral and the exhortation to get off the couch and do something, people!

Sofa People, by The Pigs.

Unwell, and driving me crazy.

No, I didn’t forget to do a post on Monday, my brain was otherwise occupied.

One of the sons was unwell and unfortunately for me it wasn’t the one who brushes off illness as he doesn’t have time to stop running about. It was the son who is officially The Worst Patient Ever.

I spent the last two days with a bored twelve-year-old talking at me all day long. Don’t get me wrong, we are big on conversation in our house but when Number 1 is sick he doesn’t do conversation, he talks at you in constant low-level whinge and condition update. After a few hours you are losing the will to live yourself.

I don’t let the kids sit on the couch and watch tv all day unless they are sick enough to need to remain in one place resting, and he wasn’t that sick. Really, he just needed to be quiet and go back to bed for a few hours and he would have felt a lot better, but I was there to talk to, so on and on he went….. I was really tempted to relax my no tv rule, I can tell you!

Anyway, I spent both yesterday and today trying to write something, anything, but the son was talkingtalkingtalking so I gave actual thinking up as a bad joke and am posting this song instead, Unwell by Matchbox Twenty.

The tiny, scary, hazards of gardening.

In Australia we have lots of creatures that people see as quite scary. We have snakes that can kill you and spiders whose bite will probably make you wish you were dead. Sharks, crocodiles, stingers… the list goes on.

These critters will mainly leave you alone unless you stomp on them or swim through their loungeroom, so really there isn’t much to worry about if you pay attention to what you are doing.

One critter we have though, is just nasty and can be quite dangerous. Here is a picture of one of them next to my ring for scale. Terrifying.

What? Something so tiny can’t be worthy of a scary post of its own?

Well, these guys are very aggressive and extra bitey. So much so that I used a stick to put my ring down. No way was I getting my fingers within leaping distance of those jaws.

This ant (Myrmecia pilosula species group) is known as a Jumping Jack or Jack Jumper). Their venom can cause severe anaphylactic reactions, even death, and is very painful (trust me, I know).

They are called Jumping Jack because when they are stirred up they move very quickly and can jump a few body lengths, even jumping off plants to attack you. And they like to bite. (Well, sting. They grab you with their jaws and sting you with their tail. Bite or sting, I don’t care, IT HURTS!) They will actually chase after you, bringing their friends along for the hunt if you don’t get away quickly.

We have a few nests of them in the garden and mainly we all keep to ourselves, we leave them alone and they leave us alone. I would like to call it peace but it is mainly a stalemate. They can’t make us move out and clearly they aren’t going anywhere either. Don’t worry, we’ve tried. I think some parts of the garden are still radioactive after our attempts, but still the Jumping Jacks remain.

One nest I am still working on removing though. Our front lawn is divided into two parts and in the middle of one side is a round garden bed about two big steps wide and it seems the bricks around the edge are wonderful for digging ant nests beside.

Over the years this bed has had various things growing in there, roses, weeds, and most recently herbs. Picking the herbs was quite a dangerous endeavor as there was always the chance of picking a handful of furious ant as well. 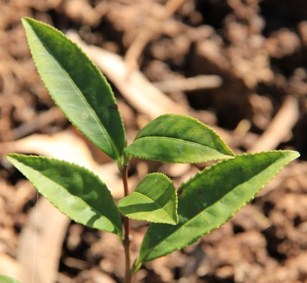 The herbs had reached the end of their life so a few months ago I decided the garden needed a re-vamp and bought a few tea plants to go in there. My theory is that they will either grow properly and I will be able to pick my own tea, or they will just grow into a hedgey thing (as tea does) and they will still look nice. Anything will be better than the half dead herbs that were in there before.

Of course it still meant I had to dig out all of the plants that were already in there and that involved disturbing the Jumping Jack nest. Scary stuff.

I had a plan though, and waited until a cold, damp day. Horrible for digging but the kind of day the ants stay at home. If you disturb them on a hot day they will boil furiously out of the ground and run up your shovel handle!

I must have chosen my day well as I only saw a few of them. Each time two or more appeared I decided that it was time for a break and retired to the house. I wasn’t scared of course, I just felt like a cuppa, ok?

Well, my tea plants are in and seem to be happy in their new home. Even though I had dug the ant nest out to quite a deep level (and gave that spot an extra dose of smelly fertilizer just to annoy them) I noticed today that they had already tunnelled back out. Bugger. 😦

Not only that, it was such a sunny day a few of the cheeky buggers were out on the bricks sunning themselves! Hmmmm…. Maybe I could be rid of the lot of them if I laid on some tiny banana-lounges and Aerogard cocktails… 😉 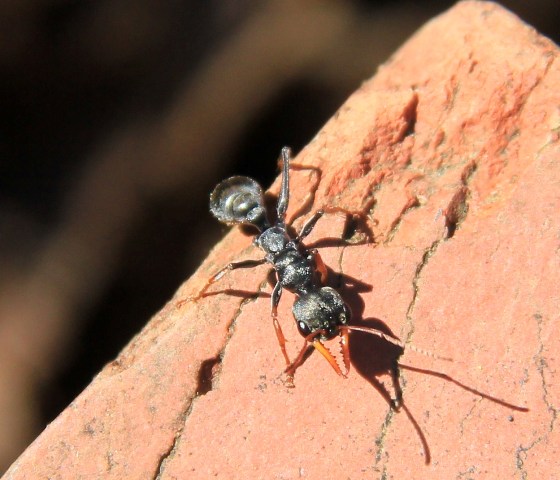 Just waiting for me to look away… then, BOING! CHOMP!