I was going through some books the other day when I came across one I bought many years ago and, apart from having a quick flick through occasionally, I am ashamed to say I have never read properly. 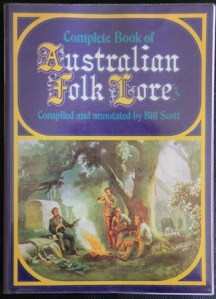 Before you tut tut me it is A4 sized and over four hundred pages long. Not the kind of book you can cart around with you for a bit of light entertainment!

It is called the Complete Book of Australian Folklore (by Bill Scott) and is a combination of folk tales, songs (with music), illustrations and snippets from old newspapers or reports. This book was first published in 1976 and the edition I am reading is from 1997.

Once I started reading it I realized that some of the things referred to in there are things I could look up in the digitized newspapers.

One section of the book I found interesting was about tin-kettling. Tin-kettling is when the peace and privacy of a wedding night is rudely interrupted by a group of noisy hooligans outside banging kerosene tins, pots and cans; hurling rocks onto the roof, and generally ruining the mood.

I’m sure that other countries have different names for similar traditions, and we have all seen that modern version of tin-kettling, when cans are tied to the back of the newlyweds car to rattle down the road attracting attention as they drive away from the ceremony.

For a time in the late 1800’s tin-kettling (also known as ‘rough music’) became a real problem in some parts of Australia. Newlyweds would be seriously harassed until the noisy ones had been bought off with sufficient alcohol.

Ignoring these ‘kerosene heroes’ would only cause the ruckus to become more destructive, with stones being thrown through windows. Even running off for a lengthy honeymoon wouldn’t help matters, the offenders would be aware of their return and the noisy torture would still be inflicted as though the wedding had just occurred.

A look through the archives shows that there were quite a few incidents, like this report from 1893,  where the tin-kettling got out of hand and people were injured.

An example was mentioned in the book of a man whose daughter’s wedding day was interrupted by a group of determined tin-kettlers.

Instead of buying them off as many did he shot at them, injuring one or two. The article suggested that if all victims of such a noisy attack reacted in such a way this annoying practice would soon end.

I wondered if that tale was true and, naturally, had to have a look. I found this article from The Sydney Morning Herald in 1873 regarding the charges and evidence against a father who had done that very thing.

Interestingly the article ends with the Police Magistrate reprimanding the youth involved; saying that it was their bad behaviour which had nearly cost their friend his life, and the prisoner his liberty, and that they were as much and more to blame than the prisoner was.

I have also found articles that show tin-kettling was used at times as a form of protest against the union of the couple. In 1861 this much married widow was tin-kettled upon her marriage to a youth who was younger than one of her sons.

The article notes that some of the most demonstrative members of the noisy crowd were the widow’s many children!

Another report noted that the Rev. Grindle of Manuden, who married his late wife’s nurse a mere month after her death, was vigorously tin-kettled by the villagers in protest. They vowed to continue until he left the town, to which her protested that his late wife would have been happy with his new union.

Too bad if you lived in a town filled with people who didn’t like you or your new partner, the wedding is not likely to be remembered as the happiest day of your life!

If you are interesting in more wedding traditions I did a long ago post about the origin of using a bouquet in weddings. Tussie Mussie.