Some of you might remember the wolf posts I did a while ago that taught us all to avoid hungry wolves at all costs, especially if you are a bridal party or in a train. 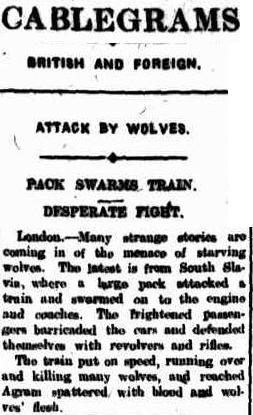 Well, this time the wolves aren’t attacking a party of people in sleds or a train crew clearing snow. This lot seems desperate enough to have attacked a moving train.

When the wolves swarmed over the engine and coaches the passengers barricaded themselves in and defended themselves with guns, the driver putting on speed to make an escape.

Clearly this group of survivors were a little more chivalrous than the wedding party from this previous post.

Of the over 100 people who were attacked in 1911 only two survived and had done so by sacrificing the rest of the people one by one as they fled.

The final details of this 1922 tale from South Slavia are a little unpleasant though, aren’t they?

“The train put on speed, running over and killing many wolves, and reached Agram spattered with blood and wolves flesh.”

Ick. I wouldn’t have wanted to be the one responsible for cleaning that up in time for the next run…