Here in Melbourne it is the first Tuesday in November and that means normal life has ground to a halt. Melbourne Cup day is upon us.

This iconic horse race is held on this Tuesday every year which sits conveniently with the great Australian tradition of using the slightest excuse to have a long weekend. Yesterday the Melbourne Cup parade was held in the city with tens of thousands of people lining the streets to see past winners and members of our racing royalty pass by. (Herald-Sun)

The Melbourne Cup, and the associated Spring Racing Carnival, is supposed to be about horse racing for but for many it is all about frocking up, having too much to drink and waking up in a place you don’t remember getting to. Possibly a garden bed.

I have done other posts about the Melbourne Cup if you are interested in finding out more.

The actual cup itself is famous in its own right- The Iconic Melbourne Cup.

This is an illustration published in 1938 of the first Melbourne Cup, which was run in 1861. If only they knew what they were starting! 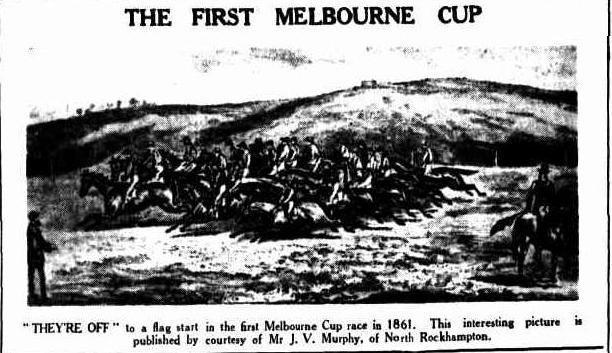