On Wednesday night in our part of Victoria, the beautiful Yarra Valley, we had a really windy night. This is not unusual for this time of year, we often get damaging winds forecast, and it is the kind of weather when many kids trampolines are found the next day, upside down, and in someone elses garden. 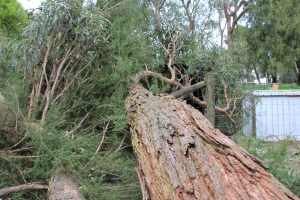 There is a shed under there somewhere….

When there are such winds, branches being blown down or trees being blown over is quite usual. We have been quite lucky in the past, each time a branch or tree has come down in our immediate area it has only meant that we spend the next weekend outside with a chainsaw, along with the occasional minor fence repair.

That night however, our luck ran out and a tree just over the fenceline (so that would really make it the neighbours tree, but I’m not pointing fingers 😉 ) fell with a resounding crash. Nothing was damaged other than the fence and a small shed in the corner of the old dog run.

The dog run is usually uninhabited as the killer dog it was built for has long passed on. Its only purpose now is to occasionally house strays while it is waiting for its next incarnation as a chook house. It was unfortunate the tree had fallen now though, the previous Sunday was spent turning it into a porcine half-way house and it was now harbouring a temporarily homeless, and much pampered, pet pig.

Sadly for Sausage* he was tucked up in his bed of hay at the time of impact. The poor old pork chop would have had a rude awakening when large branches inserted themselves into, and all around, his bedchamber. Luckily he was unhurt, although the same cannot be said of the shed. One part of the roof is now at about hip level, and a wall partially demolished. Sausage can’t escape though, as the way is blocked by other large branches, and really, I expect that he will stay away from that side of the shed for a good while now.

I have spent the day dealing with guilt ridden neighbours, photographing the damage, and dealing with the insurance company. Amazingly, the call to the insurance company was the least painful part of the day! I spent about 40 minutes on the phone, only 10 minutes of which were organizing the claim. The rest was just having a very funny conversation with a lovely girl in Sydney.

Hopefully the assessor won’t dispute the claim although I think that the fact that he will have to climb over the trunk to get to a position to see the damage will work in our favour….

Below is a photo of the Sausage tucked back up in bed the morning after, with a branch partially blocking the doorway. I think the most annoying thing for him last night was that when all within earshot came to see what was going on and not one of them gave him something to eat. 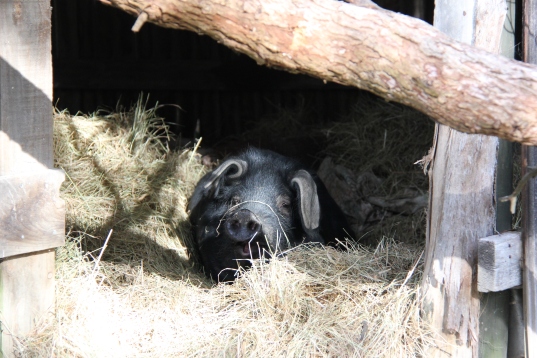 *Sausage is not his real name. Each time I go to feed him I call him a different name; Sausage, Pork Chop, Ham Steak, Sweet and Sour…. The self-righteous neighbours closest to his pen had made the mistake of assuming that because we are not vegans like them, any edible creature who sets foot on our property is there purely to be served up with sauce. Idiots.

Those eavesdroppers are not really known for their sense of humour, so now they have to suffer hearing the Man and I discussing the porkers potential deliciousness every time we wander up to his pen. When he was being fed iced buns on Thursday the one doing the feeding jokingly commented that the sweet treat was not good for him. I suggested that it was all good because “it sweetens the meat” and that we should feed him apples now to save time later.

I think those neighbours will learn to mind their own business soon enough, after all, it was their tree that came closest to killing him, not our heathen, carnivorous ways 😉