Yesterday’s post was about the bite of a tarantula supposedly causing people to dance uncontrollably* until the effects of the venom was reversed by the “Guild of Tarantula Players”, for a hefty fee of course! 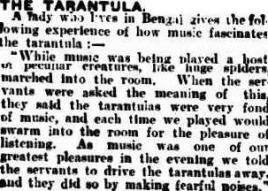 Today’s post is again about tarantulas and music. This time, though, it is a tale of tarantulas that love music.

A lady living in Bengal in 1922 reports that when music was played in a home she was visiting, ‘a host of peculiar creatures, like huge spiders, marched into the room’. Eeeeek!

When the servants were questioned they explained that the spiders enjoyed the music so much that whenever it was played they swarmed in to listen.

Hmmm…. If that was my house music would be banned! Banned I tell you! Alternatively I could give everyone some sort of spider-flattening weapon and turn on the radio. All would be expected to take out as many music-loving arachnids as possible. I would probably need to book a carpet cleaning in advance though, wouldn’t I?

*In the comments it was pointed out by a more logical mind than mine that the dance mania attributed to tarantula bite was probably caused by ergot poisoning.