How to get rich. Oh, and lonely. Well, you can’t have everything…

Soapbox warning, so brace yourself. I clambered up here on Thursday when I was listening to the news on the radio in the car and heard the richest woman in the world, Gina Rinehart, and her kind advice on how get rich.

Via the medium of ABC news radio I found out that if we want to be as wealthy as Gina all we need to do is to stop moaning about not having money, get out of the pub, put down the smokes, dump our friends and work more. Gee, thanks Gina, that bit of class snobbery really helps us. Does it mean that since I don’t smoke or spend any time in the pub I am rich? Just let me check… Hmmm… No, don’t see any change to the bank balance. Bugger, it seems getting filthy rich is not that easy.

I think that Gina has overlooked a few crucial details though.  She hardly had to pull herself up by her own bootstraps, did she? Her dad was mining magnate Lang Hancock. (This article on the right details a rescue that Mr. Hancock performed in 1947, bravely landing his private plane at Mulga Downs station to rescue the station managers sick son.)

Gina was an only child, born into wealth. She is hardly a poster child for telling us plebs how to better ourselves, is she? The hardest thing Gina had to do in order to be rich was to keep her step mother, the scary Rose Porteous, at bay!

Gina also wants to lower the minimum wage. I’m not sure that the lower classes working more and getting paid less for it will actually make more millionaires out of us, although that is what she claims to be trying to do. Maybe she has a very creative team of accountants helping her with her sums?

I know there are bludgers out there that do sit on their butts, whining about being broke, and don’t actually do anything to change their situation, but for the majority of us there is no amount of hard work that will make us millionaires, let alone billionaires like Gina.

Actually, I feel far less envious of Gina Rinehart than I do sorry for her. She has been in the news a lot lately for things that are wealth related and not in a good way. It would appear that the one of the ways she has found to stay rich was not to take her own advice on restricting her spending and socializing, but to sneakily make sure that the proceeds from a family trust stayed under her control rather than being distributed to her children. (Daily Telegraph, Herald-Sun)

Unsurprisingly, she was resistant about details of the case against her children being released to the public, she must have known that fighting with your family over money when you are already obscenely rich is a terrible thing. What amount of money would ever make up for alienating your kids?

Sorry Gina, I would rather less money and a happy family life. Keep your opinions to yourself. We don’t want to be you.

It’s a Long Way to the Top (If you wanna be in the National Archives).

I was interested to read the list of this years additions to the National Film and Sound Archive’s sound registry. There are some great things on it but I believe that the most popular addition will be It’s a Long Way to the Top (If You Wanna Rock n Roll) by AC/DC. (ABC news)

It is such an icon of Australian rock that the song, film clip, and the bagpipes riff are each worthy of individual fame!

AC/DC are beloved by Australians, so much so that Corporation Lane in Melbourne was officially renamed AC/DC lane some years ago.

The famous video clip for this song was filmed in Melbourne in February 1976, on the back of a moving flatbed truck. Very cool, and a great way of avoiding having to get the proper permits to film.

The line-up of the band has changed many times over the years and is one of the few I can think of who have gone on to massive successes despite the unexpected death of one of their main members. In 1980, lead singer Bon Scott (who sings in this clip) died after a night of drinking. He was replaced by the big-voiced Brian Johnson.

AC/DC have many iconic songs, and I couldn’t even narrow their song list down to my top 5 because I love so many of them. I think they should just submit their entire back catalogue to the archive, surely any official who rejected it would be required to hand in their Australian citizenship for such a crime!

Creepiest television advert ever. Ever…..

I was just watching the brilliant Gruen Planet and they showed this television advert for Little Baby’s Ice Cream. Some of you have probably seen it before so I apologise if I am behind the times. I just had to inflict it on you as if I had found something so horrifying in the old newspapers I would have definitely shared it with you then.

I don’t think I have the words to describe how it made me feel, (those eyes, *shudder*) but it made me want to scrub my brain clean.

I can’t tell you how pleased I am that this product is not available over here, walking past it every day in the supermarket would totally destroy any remaining shreds of sanity I might have left.

If you haven’t already seen this just be warned, there are some things you can’t unsee, and you probably will want a shower afterwards…. ick….

I love this article, scientists doing their best to debunk an old superstition. 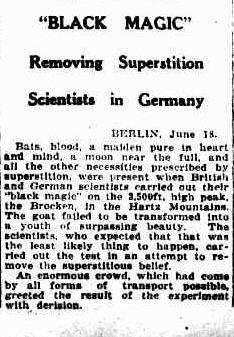 The scientists assembled all the ingredients necessary to perform this bit of black magic; the bat’s blood, the top of a mountain, a full moon, a maiden pure of heart and mind, all in order to magic themselves up ‘a youth of surpassing beauty’.

I know that they were sure they were out there proving that science trumps magic but I wonder how many of the scientists were secretly hoping for that extremely good-looking youth to appear before them?

I’ve got to feel sorry for the maiden though. She was pure of heat and mind but obviously just not pretty enough. The scientists were happy to sacrifice her in order to get a better looking version. Poor bugger….

Obviously the Brocken was the kind of place that make it easy for people to believe a bit of the otherworld seeps through. I have did a post last year about the Spectre of the Brocken, a pine tree wielding monster stalking about the mountain.

It is a pity the Spectre didn’t make an appearance during this experiment. I can just imagine the crowd scattering before it, all thoughts of magical appearances abandoned, and the pure maiden just left there all alone, still tied to the sacrificial altar. 😉

After the sad news of the death of Neil Armstrong I though I would do a bit of a search for moon articles in the old newspapers.

It didn’t surprise me to find that there were some strange superstitions regarding the moon, not the least of which were terrible crimes committed by people claiming to be under the influence of the moon.

I am not saying that the moon has no influence over humans. Anyone who has worked in a hospital emergency department or law enforcement will probably have tales of strangeness that seem to peak around the full moon.

Regardless of that, I think it is safe to say that blindness caused by allowing the rays of the moon to fall upon your eyelids is something that I can point the finger at and call ridiculous.

This article from 1907 suggests that the blindness inflicted upon the captain of a ship was attributed to him falling asleep on deck and the moon shine blinding him. Didn’t he have a cabin? Why was he asleep on deck?

Maybe it was the moonshine that caused his blindness.

I am thinking more along the lines of home-brewed moonshine though. Depending on the ingredients used, something like that could cause blindness and a perfectly good cabin to spend the night empty, as the good captains legs might have felt the befuddling effects of the ‘moonshine’ as well!

Sad news over the weekend with the passing of Neil Armstrong, the first human to set foot on another planet. (ABC news Herald-Sun)

Although those first steps on the moon by Neil Armstrong and Buzz Aldrin were more than 40 years ago, it was such an amazing achievement that I doubt that there are too many people who wouldn’t immediately recognize the phrase “That’s one small step for man, one giant leap for mankind”.

I was interested to read that the moon landing came at the end of his NASA career as Mr. Armstrong retired as a NASA astronaut in 1971. His name is so linked with space travel that if it was reported that he had passed away in the actual building containing mission control I wouldn’t have been surprised.

I have done a post about the Australian movie The Dish before, but I am going to share it with you again as it is such a favourite in our house. This movie is the reason why when I said “Oh no, Neil Armstrong died today” the kids immediately knew who I was talking about.

Watching the crowd completely engrossed in the moon landing on the old television in this movie still gives me the chills, what an amazing thing it was.