I unexpectedly came across this article and couldn’t help but post it. 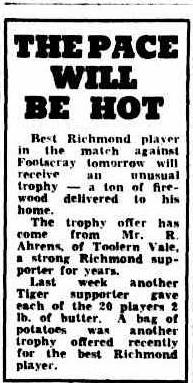 In 1951 the best Richmond player in the game against Footscray was to receive a tonne of firewood from Mr. R. Ahrens of Toolern Vale. Richmond fans seemed happy to reward their players for good performances, in earlier weeks other fans had gifted things like potatoes and butter.

Those were the days weren’t they? When footy players lived on the same planet as the rest of us and actually had jobs. Can you imagine a top-level footballer being happy to receive that as his reward for a good game these days?

In Australia our professional football players are paid a great deal of money. Not as much as other football codes around the world, very few of ours get the millions, but still, at the top-level they don’t have to worry about where their next meal is coming from, that’s for sure!

Even if they don’t get paid the big dollars there is still the media and endorsement path to supplement their income. Not only that, it appears they rarely have to pay for entry or drinks on a night out….

Here is a short clip of Australian footy in case you have never seen it played before. (The team with the black guernsey and yellow sash is Richmond)