It has been a long time since I have done a police incident post, I love these little historical peeks into the lives of the badly behaved. The crimes committed and the language used by the reporters is just wonderful.

After I started writing this post I realized that some of you might not know about Australia’s convict heritage, so, just in case, here is my potted version of how many of our not too distant ancestors became Aussies.

In the late 1700’s the British noticed that there were far too many members of the criminal lower class cluttering up their country. They decided the best place to keep them would be as far away as possible. Fortunately for them just the thing they needed was hanging around, unloved, in the back of the Empire’s cupboard, Australia!

The ships of the First Fleet arrived in 1788 bringing 751 convicts, and over the next 80 years more than 160,000 convicts became reluctant Australians.

Many convicts were transported for extremely minor crimes, stealing chickens, bread etc, although I can proudly say both my Great Great Great Grandfather and Grandmother were transported for individual counts of highway robbery. They both seemed to spend more time in court after transportation than before though, clearly being sent to the other side of the planet was no encouragement to good behaviour!

Once the convicts arrived in Melbourne, Sydney or Van Diemens Land (Tasmania) they were not imprisoned for the rest of their terms, they were mainly assigned to free settlers to work until they earned a ticket-of-leave.

It was hardly surprising than that since they were being used as what was effectively forced labour most of them misbehaved at every opportunity. The authorities came up with some interesting punishments for the badly behaved though. Apart from fines they were regularly sentenced to time in the stocks or whippings. Women were often sent to the Female Factories and men to the tread wheel. I have done a post in the past about the tread wheel if you are interested in reading more. Female factories were exactly that. Factory-like workhouses for women who were either awaiting assignment, childbirth or being punished.

From what I can tell from my readings these punishments were not much of a deterrent. I am sure they were far from enjoyable, but many of the offenders seem to return to the same courtroom time and time again. Take the first man in this 1832 article, Phillip King. He is described as ‘an old veteran in the path of disobedience’. Clearly the seven days sentence to the (tread)mill wasn’t his first time, obviously the tobacco he bought with the money made from selling his masters stolen brooms was worth the punishment.

This article really helps you to see what life in the lower classes might have been like in Australia in 1832. When you read it see if you can work out what all the slang terms really mean. I absolutely love the slang used in the past so any of you who put in an effort will earn my eternal admiration and a smiley face stamp on the back of your hand as soon as I run down to the newsagent and get one. 🙂 (just post me your hand and I will stamp it and send it right back).

Some other police incident or historical Australian slang posts I have done are;

Bouncible and handing out the rhino

Bobbery, Toggery and a bird’s eye fogle, killingly twisted about his weasen

Bombastes Furioso and Lady Barrymore in a slouched castor. 1832. 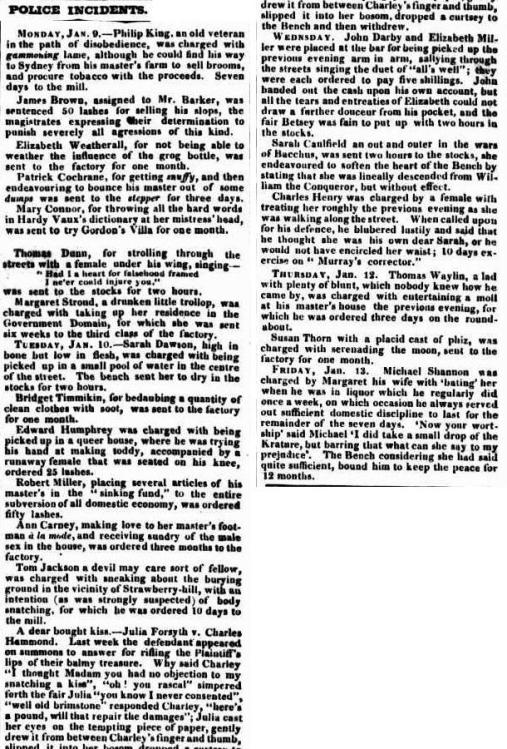 *If you would like to read other details about the convict years have a look here.

First up, can I say that I am amazed at the restraint from everyone who had anything to do with this article.

A fisherman hauls up a 6ft creature in his nets, it has a human-like face and torso and NOT ONCE did they use the m word.

After all the articles I have read that have dramatized anything that came from the waves with the slightest bit of humanness about it and immediately cried ‘mermaid!’ this is a refreshing change.

If you want to read about the way mermaids have been treated in other articles I have found have a look at vengeful mermaid, stuffed merpeople,  or Ballinakill mermaid.

You will quickly notice that being a human-like fish is not all it is cracked up to be. Not much sitting around on rocks, combing your hair and singing to the sailors. Generally your worst enemy is an oar swung in anger.

What I want to know is where on earth they got a jar of alcohol big enough to fit a 6ft fish into!

After I did the post the other day about the wet weather we have been getting here lately Meeks requested that I look for a particular historical photo of Melbourne in flood.

I was pleased to have an actual destination in mind as usually when I push my little raft out into the ocean of articles to begin searching I go wherever the wind takes me. It can make for some interesting finds though.

Searching for photos of a wet Melbourne I found some wonderful old pictures of places that look very different today than they did 80 years ago, and drier!

While I continue the search for Meeka’s requested photo here is one she might like of a Kensington house flooded halfway up the walls on Christmas day in 1934. Kensington is only 4kms from the CBD, even in the 30’s it wasn’t out in the bush.

The thing that makes this flood unusual is that Christmas day here is usually known for its unrelenting heat, not its flooding rains! 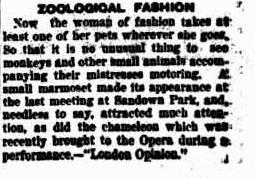 Since yesterdays article was about a fashionable womans toothy downfall, I thought I would continue the theme with another article about historical fashion.

I thought the trend for using small dogs as animated accessories was a fairly recent one but this article from 1905 tells me that it is one that has been  resurrected. These women had much more exotic pets though didn’t they?

A marmoset at the races? Intriguing! I’m not sure that these animals ever enjoyed their days out as much as their keepers though.

I like the “at least one of her pets” part of this article. It immediately brings to mind the day some woman makes a terrible choice of which pet to take out for the day only to find they don’t get along. I have visions of the marmoset and the chameleon at the opera, both battling for supremacy in the society ladies best wig.

I can partly understand the appeal of a chameleon. It is one pet who would always match your shoes and bag isn’t it 😉

In Melbourne we have a thing called the Spring Racing Carnival in October and November. It is a time when people who love horse racing get dressed up and celebrate with the like-minded. It is also a time that people who don’t know much about horses but love to get dressed up and do a bit of celebrating let loose.

Every year there are tales of disaster in the social pages, and the track carparks are full of people who are suddenly regretting the decisions they have made under the influence of copious amounts of alcohol.

I thought this article was very funny, even though it is from 1888 it could well refer to the jealous rivalries that swirl through the crowd at the racing next year too.

This is a funny tale of the competition for attention between Miss A___ and Miss R___ at the Rockhampton races.

Although Miss A___ was the recipient of the majority of the attention she made the mistake of opening her mouth a little too widely when she was cheering the winner past the post and out popped her shiny false teeth.

Miss R___ was quick to see her opportunity to humiliate her rival and pounced. Holding the teeth aloft she politely but loudly returned them to their owner.

Poor Miss A___ immediately fainted and was carried home on a stretcher, her days at the top of the socialite set at an end. Oh, the humiliation!

I thought this article from 1914 might be appropriate for a Monday morning as weekends are traditionally the time for overdoing it. Monday is the day of wishing you had shown some restraint!

I expect that if these drunken cows knew what was going to happen once they ate the waste from Farmer Frank’s cider press they may well have shown some restraint too.

I wonder what they were really thinking as they lay slumped against the wall of their field? I expect that the twelfth cow especially was feeling nothing but regret.

Surely this farmer knew that a bucket of cold water just makes a drunk person angry. If he really wanted the cows to recover quickly he should have just put on a huge pot of coffee and fried them up a greasy breakfast.