I know this isn’t the sort of thing I usually post about, but I don’t usually post on the weekend either so here it is anyway….

This is something I found on the ABC news website yesterday morning, and as it is something that is close to my heart I thought I would share it with you.

It is an interview with a neuroscientist, and in it she talks about the best way to stimulate young brains and get them in the best shape for learning later in their lives.

Something that always makes me laugh. Australian sign language, as told by Adam Hills.

This Friday, in the hopes you will have a chuckle all weekend, I thought I would do something different and share one of my favourite Australian comedians with you, the lovely Adam Hills. He is one of those comedians that is unfailingly nice and always hilarious.

Everything he does amuses me, but as a person that loves words and language this show about Auslan (Australian sign language) he did at the 2010 Melbourne International Comedy Festival has a special place in my heart.

My favourite part of this clip starts at about the 3:20 mark, and is about a very Australian phrase loosely translating as ‘I am very annoyed with you, and everyone around you’.

I will give you a language warning before you watch it in case you are of delicate sensibilities.

Awww, it’s not that bad, go ahead and watch it. I guarantee that you will laugh, and possibly be tempted to make up some of your own sign language. If nothing else you will have learnt an amusing Australian phrase that should not be used in polite company.

If you enjoyed that clip, here is a link to another show where he has an Auslan interpreter on the stage with him. He incorporates her into the show wonderfully, saying things just to see what she will sign through her laughter. http://www.youtube.com/watch?v=BtW-RtMJkwY (I love the bit where he asks if there are any deaf people in the audience and a bloke calls out ‘pardon?’)

I really hope that this bee story is true, even if it is a little sad.

I know bees can fly quite far, but two miles without the enticement of a yummy flower at the end sounds a bit unbelievable.

I wonder how the bees knew where their late beekeeper was buried? Perhaps the old custom of ‘telling the bees’ was taken a little too far this time, clearly it didn’t settle them down!

Where did they get the key?

Please tell me that the article I read on the Herald-Sun website this morning is true.

In udder news … officials may blow up cows | Herald Sun.

The article is about a group of cows that took refuge in a cabin in the Rocky Mountains, Colorado, during a snowstorm. Unfortunately, the cows clearly couldn’t work out how to light the fire and sadly, all perished. Now their frozen corpses are stuck inside causing an interior design dilemma for anyone else who might want to use the cabin.

Growing up on a television diet that leaned heavily towards Looney Tunes and the Muppets, to me this article is pure gold.

Two Air Force Academy cadets were the ones who discovered these unusual houseguests, and I can only imagine what they saw when they opened the door. Yeah, I know that it was probably just a herd of cows lying on the floor, but I know what I want it to have been….

The entire insides of the cabin turned into a huge iceblock, freezing the cows in a tableau of lost campers…. A couple of cows huddled around the hearth, disappointed looks on their faces and no matches in the box, one rummaging through the cupboards for scraps, another one banging on the frozen pipes with a stick (like it will help)…. you get the idea….

The thought of them planning to use explosives to fix this little problem is just the best ending I could hope for. Hopefully they use Acme brand dynamite, and get the Coyote to press the plunger. What could go wrong?

I have done a few posts recently about Tom Cole, Northern Territory buffalo hunter extraordinaire. Here we are catching up with Tom again, this time it is 1937, and will soon be the end of the wet season. Tom is about to gain an offsider. 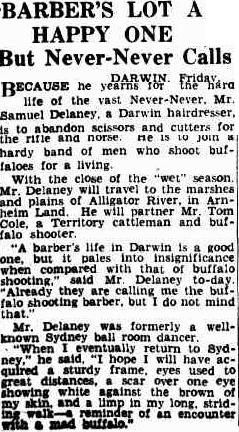 I am not too sure how this unusual pairing is going to go. Tom appears to be a man’s man, a person who doesn’t have much to do with barbers or ballroom dancers. Interestingly though, they are the very things that his new offsider Samuel Delaney is known for.

Now don’t get me wrong, I am sure that there are manly hairdressers out there, blokes that like to cut hair during the week, and kill things with their bare hands on the weekends. I’m just saying I have never met any. Especially ones that are also well-known ballroom dancers.

What on earth are Tom and Samuel going to talk about around the campfire of an evening?

I love the end of this article where Mr Delaney tell us about what he is hoping to come out of this adventure with.

‘When I eventually return to Sydney,’ he said, ‘I hope I will have acquired a sturdy frame, eyes used to great distances, a scar over one eye showing white against the brown of my skin, and a limp in my long, striding walk— a reminder of an encounter with a mad buffalo.’

It is nice that he has such clear hopes for this little adventure, although this wish list sounds he actually wants to be on the cover of a Mills and Boon novel.

Well, good luck to you Mr Delaney, I will be looking for an article regarding your safe return. I hope the scar over your eye is exactly how you hoped, without a life threatening infection ruining it, and that the mad buffalo only injures you slightly, giving you the rakish limp you are hoping for and not crippling you for life….

Happiness is something that doesn’t just happen to you, you have to put in a bit of effort yourself, to be open to it. The more you look for happiness the more of it you will find.

Happiness is scared of miserable people, and avoids them wherever possible.

I love the way this 1937 article puts it, that happiness is a light, and we may keep it burning if we will.

I have started this post by writing nicely about happiness in order to butter you up, so you will keep reading when this post degenerates into a fart joke.

When we go camping the kids and I always end up playing Go Fish over and over. Often it ends in some kind of battle scenario where someone has won too many times, annoying the other two of us to the point where we gang up on that one to ensure they are taken down.

Over Easter weekend we were playing and I was out, leaving the two boys to battle to the death over the last few cards. I started doing a commentary on them, and to get the full effect, please read this next bit in a deep, monster-truck announcer style voice. So here we are, number one and number two, battling it out to the bitter end. Who. Will. Win?!

They are little boys, so when they started laughing at my commentary naturally one of them let out a bit of stray wind, making them laugh even harder. I tried to look sternly at them, as a mother should, then, through his laughter number two spluttered ‘that was my bitter end’ dissolving us all into hysterics.

You see, on the outside I might be a grown woman, but not so deep down inside I am really a twelve-year-old tomboy.

From now on I can tell that every time someone uses the term ‘the bitter end’ around us we are going to flash back to Go Fish out in the bush and a farting nine-year-old…..

It is the small things that make us happy 🙂