Yes, bissextile. An unexpected word really, and upon my first reading of it I had an instant flash of a decorative tile adorned with an illustration taken from the sealed section of the Karma Sutra. Something not usually found in your average bathroom.

Bissextile, disappointingly, turned out to be nothing so startling. It is another name for today, the extra day falling in a leap year. Bissextile doesn’t really shout calendric term to me.

I am absolutely not a mathematician, words are the thing I love, and that will be fairly obvious to you when I say I can’t work out why on earth bissextile, twice sixth, is used for something that happens every four years. I really wanted to know why, and to share it with you, and I read any amount of explanations. No matter what, nothing made any sense to my brain whatsoever.

The usually helpful thefreedictionary.com confused me even further with the explanation of the latin at the end of their bissextile entry stating it was because the sixth day before the Calends of March on February 24 occurred twice every leap year.

Ummm….yeah…. You can’t see me but I have a glazed look in my eyes.

This article from 1952 tells me that Mrs. Myrom Palmer had bissextile births in both 1948 and 1952. In 2012 her children are now celebrating their 14th and 15th birthdays. An excuse to be cheap on the presents if you are a mean parent!

I love that the doctors estimated the chances of two leap year births happening in one family as one million to one. It is amazing how often that happens, isn’t it? One million to one chances seem to crop up nine times out of ten. (I dips me lid to you, Sir Terry Pratchett)

I did a post some time ago about a blacksmith who was also a part-time dentist. It has been quite popular which makes me wonder if people are looking for someone to verify their suspicions that their own dentist is in fact more at home in a forge wielding a large hammer than he is gently fixing their teeth.

I have been stirred to do another post in the same vein as I spent an afternoon at the dentist myself last week getting a filling. I have a pretty high pain threshold, but when that drill hits the nerve….owwwwww!…..

I was quite glad that the Wynyard blacksmith-dentist from this 1939 article who made his own forceps was a thing of the past. He didn’t use anaesthetic and I’m willing to bet that he didn’t know much about what we consider basic surgical hygiene either…

I had also taken needle-shy son number 2 for a check-up, an exercise that stretches my negotiation skills. When I read this article I could only imagine a world where boys willingly take themselves to the dentist to have a tooth extracted, if only it had cost me a mere shilling! (Pass on the spitting in the gutter on the way out though.)

When you are rich, being bored is a whole different thing. 1907.

I was getting a bit bored with my old theme after a year, and my regular readers will notice that I have changed it. Please let me know if you preferred the old one though!

I was bored so I changed my blog theme and rearranged some furniture. I’m easily amused….

If your name is Rockefeller and you get bored you build a lake to amuse yourself. It is a bit of a sad life though when your newly built lake has a watchtower for your bodyguards to keep a look-out.

I now have a mental picture of hundreds of heavily armed guards surrounding the lake, all looking outwards for an imaginary enemy. A lonely figure is out skating on the frozen lake without a single person watching or caring.

I suspect that the negative newspaper articles about the life of J. D. Rockefeller are more about the press wanting him to be sad and lonely than him actually being so. Early on Rockefeller was a driven businessman and did his best to monopolize the oil business, driving competitors out and indulging in a bit of price-fixing. The press waged a campaign against him and, realizing he was so disliked, later in life he became a noted philanthropist, that is what he is remembered for now. When you are obscenely rich you get to buy your way into the favour of the populace! 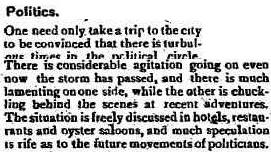 Kevin vs Julia. Post number 2. Sorry if you are bored with it, there is nothing else on telly or the radio and the constant bombardment means I have succumbed to its influence!

Politics never changes. Turbulous times in political circles, lamenting on one side while the other is chuckling behind the scenes…. Turbulous is not a word you will find in many dictionaries, it seems to be an old and little used one. I think it is a great one though and will be trying to inject it onto the household lingo. It would be a great name for a political newspaper wouldn’t it? The Turbulous Times. Accurate too.

This article from 1904 could well be in any Australian paper today talking about the next chapter in the Kevin v Julia battle. Everything except the oyster saloons. Australians gossip in coffee shops now. Much speculation is rife as to the future movements of politicians too. We just wish they would all move away.

The only beneficiary from all of the political to-ing and fro-ing between Kevin and Julia lately will be the telecommunication companies. The telephone of anyone with the slightest bit of influence in Canberra will be running hot day and night right up until 10am on Monday.

No matter how important they believe themselves and their jobs to be, I know the general population would rather see Kevin and Julia fighting to the death gladiator-style for control of the party. I expect Julia would be ecstatic to be fronting Kevin armed with a sword and the freedom to take him out with impunity. I suspect that Kevin on the other hand, would be more likely to talk her to death with his weasel words and double talk and then smack her over the head with his shield when she started to nod off.

Government leadership decided by heads on spikes. That would be far more entertaining than being subjected to any more media speculation and the constant dissection of every insignificant fact and old soundbite. Bring it on!

1. The act of plotting.
2. A crafty scheme or cunning design for the accomplishment of a sinister end.
(thefreedictionary.com)

Machination is the perfect word to describe what ex-Prime Minister Kevin Rudd and his supporters in the Australian government have been doing for the last few weeks, culminating in the events of today, and those that will fill the newspapers next Monday.

You have to understand that Australians in general don’t take politics and government too seriously.  We don’t like to vote, and the person who gets in is usually the least disliked one, not the most popular. In Australia you won’t see any of those well-attended love-ins politicians get in the US. The biggest reason people go to see their local member here is to have a shout at them and tell them what a crap job they are doing. We view politics a bit like a car race, our ears only really perk up when something goes wrong and one of the leaders crashes.

Kevin Rudd crashed and burned in spectacular style a few years ago when Julia Gillard performed an unexpected manoeuver, cutting him off and sending him plunging over a cliff. She took over the leadership herself in quite a nasty and personal attack on Kevin, and became our first female Prime Minister . Nobody really cared that unpopular, micro-managing, double-speak Kevin wasn’t in charge, but in overthrowing her boss, Julia proved the thing that we all know to be true. Politicians can’t be trusted. She never reached the level of popularity or respect a properly elected leader should have, even after an election kept her in power.

Kevin seemed to take the criticism and personal attacks to heart, spending his time as the new foreign minister making friends overseas and rolling up his trousers to help out flood victims in Queensland in an attempt to revamp his image and convince us he was really a good guy.

We didn’t believe it, and all suspected that he was spending his spare time in a dark lair formulating an evil plan to take Julia down. We were right. Yesterday we heard that Kevin was throwing in his job as the foreign minister and cutting short a junket in Washington. He was coming home to have a showdown with his arch-nemesis. Today we hear Julia has called for a leadership ballot on Monday morning. We are all a bit sick of Julia now, so Kevin and his efforts to undermine her have piqued our interest again. Really though, we all just wish they would shut up and get on with the job of running the country, or let someone else do it.

I laughed at this article from 1947, if this was the punishment for plotting against the government here there would be nobody left! I am sure that Julia would love to mete out the same kind of punishment to Kevin and his supporters. Death, with a side order of jail,  heavy fines and revocation of citizenship.

Unfortunately, the loser of the showdown on Monday will get a job on the backbench and still collect a paycheck the size of which the rest of us would kill for. Any remaining shred of credibility either of them had is the only thing that has been sentenced to death.

Not much of a punishment for all the ridiculous media speculation we have been subjected to for weeks. For some time we expected that this leadership spill was nothing but a beat-up.

The media frenzy bought to mind the hilarious shows Frontline, an Australian comedy from the 90’s satirizing current affairs, and The Hollowmen a satirical look at what really goes on behind the scenes in a political department.

This Frontline clip is called Point Scoring and Emotional Manipulation http://youtu.be/Cwfne1aYA3g . The Ray Martin hairstyle on Mike always cracks me up and the fashions are dated. Nevertheless, the subject is just as fresh as ever and I bet those same conversations are going on in news rooms around the world right now.

The Hollowmen; http://youtu.be/7XeQin9abx4 and we just know that this is how politics really is.

One year ago today we all heard the news that there had been a 6.3 magnitude earthquake in Christchurch, New Zealand. 185 people died and many were injured or displaced. Across the ditch, we hung on the news reports of rescues and the visions of the bravery of rescuers.

Christchurch and its surrounds have always been on shaky ground, and in the last year there have been regular tremors (more than 5000), including another large quake just before christmas, keeping the population on their toes.

Over 1400 buildings, homes and businesses, needed to be partially or totally demolished due to damage after the 2011 quake and some places have been abandoned altogether. Rebuilding has begun in the city, but at a slow pace due to the ongoing shakes.

Two minutes of silence will be observed at 12:51 New Zealand local time today, the time the quake hit, and afterward some of the people who helped in various ways at the time will be presented with awards.

The people of Christchurch and the other affected areas will always remember the events of that day, but they are nevertheless going on with the business of living in their beautiful place.