When Fresh Pressed had a post last week entitled ‘Who is monkey-fish’ http://missapismellifera.com/2012/01/09/who-is-monkey-fish/ what self respecting lover of Forteana could resist having a look!?

It was a really interesting post with some great photography and the monkey-fish himself was disturbingly appealing. That post also included an amusing cartoon of the monkey-fish devouring an unsuspecting Emma, which ties in nicely with the rest of my post here!

Fortunately no monkeys were harmed in the creation of the monkey fish, although the poor thing might have a short life underwater as it appears he was made out of a high proportion of non-aquatic items like chicken, paper, clay and wood.

With my love of old newspapers what could I do but have a look and see if I could find an article about the monkey-fish! 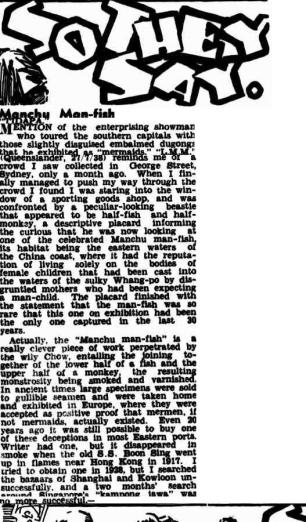 In 1938 a member of the monkey-fish family was spotted attracting a crowd in the window of a sporting goods shop in George Street, Sydney.

In this incarnation it appears he was called a ‘Manchu man-fish’ and was reportedly caught in the Eastern waters off the coast of China. Unfortunately his diet seemed to consist solely of the unwanted female children thrown into the Whang-po river.

Does that mean any young girls having an afternoon swim were in extreme danger of being taken by a confused monkey-fish wondering why his prey was a better swimmer than usual?