My boys are getting older now and a lot of the little kids books that they have loved are getting put away and being replaced by chapter books about Astrosaurs and Geronimo Stilton. I can’t bring myself to give away those old book just yet, we have spent so much time with them. They have been read and re-read so many times that there are some that are burned into my brain. Some I hated and read through gritted teeth and there are a few that will just be safely put away. Can’t just give away those little family members.

Some are still out there though, and are regularly read even though the kids are a little old for them. We keep a few books in the caravan to assist in settling the boys into their sleeping bags at bedtime after a day of rampaging around, and the one that gets bought out each time is Scuppers the sailor dog. It is an old Golden Book and is far to young for them, nevertheless it is high on the most requested list. I think one of the things that makes it special to them is that it was their Dads favourite when he was small too. Last time we went away I had to read it each night even though a selection of other books was offered.  When we finished reading on the first night we started remembering all the other places it had been read by us. It turns out that our copy of Scuppers is a very well-travelled book. It has been read on all of our long trips and many, many, many weekends away. Scuppers has lived in our camper trailer or caravan for nearly 10 years and is dragged out nearly every night when we are away. I think the only place Scuppers hasn’t been read is at home! I think that Scuppers will have a home in the caravan even after the kids have moved out, there is no reason to stop such a loyal friends travelling ways.

Born at sea in the teeth of a gale, the sailor was a dog. Scuppers was his name….. Might have to pack up Scuppers and take him on a boat trip one day.

Posted by metan on May 30, 2011
Posted in: old newspapers. Tagged: copper, history, money. Leave a comment 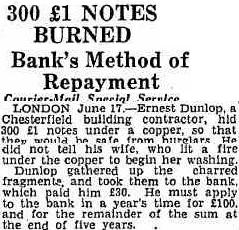 I wonder if Ernest Dunlop actually paid any attention to what his wife did each day. Did he wonder how his clothes appeared clean and dry each time he needed them? I think that a man who hides money under the copper is not overly smart and possibly deserved to lose it.

If the man of the house was silly enough to hide some cash in the oven here he would deserve to lose it too. Of course that would be because I saw it and confiscated it.

Three hundred £1 notes would have been quite a brick. I’m surprised that she didn’t notice it when she lit the fire. Of course, there is always the chance that the story is made up too. Five years is a bit of a long time to wait for your payoff though. I wonder how much money he burnt to have his ‘evidence’? Too bad for him if he burnt more than the £30 the bank gave him in return for his handful of charred fragments.

Posted by metan on May 30, 2011
Posted in: GOLD, old newspapers. Tagged: gold, history. Leave a comment

I wish that my backyard was as profitable as that of Mr Butterick’s of Wedderburn.

I am not surprised that he started digging holes in his backyard. He did have seven daughters after all. Maybe he didn’t have a shed. He also must have had very discreet neighbours if nobody else knew what he was doing for 18 months. I think that if I started mining in our garden someone would notice.

Poor guy didn’t get too long to enjoy the fruits of his labours though, dying only two years after the discovery.

Very convenient, having the gold right on your doorstep. People travelled from all around the world to share in Australia’s gold rush. He didn’t even have to leave home. 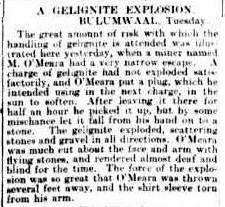 My apologies for the blurriness of this article but I just had to put it in. It reads;

The great amount of risk with which the handling of gelignite is attended was illus- trated here yesterday, when a miner named M. O’Meara had a very narrow escape. A charge, of gelignite had not exploded satis- factorily, and O’Meara put a plug, which he intended using in the next charge, in the sun to soften. After leaving it there for half an hour he picked it up, but by some mischance let it fall from his hand on to a stone. The gelignite exploded, scattering stones and gravel in all directions. O’Meara was much cut about the face and arm with flying stones, and rendered almost deaf and blind for the time. The force of the explosion was so great that O’Meara was thrown several feet away, and the shirt sleeve torn from his arm.

I don’t know too much about explosives, just to be VERY careful with them, so I am not sure how dropping gelignite managed to detonate it. I do know however, that if I had a stick of gelignite I would be far more careful than to leave it in the sun for half an hour and then drop it on a rock.

I think that once O’Meara regained his sight and hearing, his flying-gravel rash healed and he bought a new shirt, he probably learned to be a bit more careful with explosives too.

I was thrilled whan I found this article because my Great Great Grandfather’s name was Morgan O’Mara (or O’Meara depending on who wrote the document). He was a miner and a farmer and lived in the Bulumwaal area at that time.

There is a chance that this blown up O’Meara and the O’Mara I wrote about in the post on the 17th of March are the same person. That O’Mara found diamonds when he was looking for gold. If these O’Meara O’Mara’s are the same person he definitely has luck on his side (still haven’t won Tatts, clearly he used it all up before I was even thought of…. 😉 )

This article shows how lucky the kids a few posts ago were. They were playing with far more than one stick of gelignite and I think that careful was probably the last thing they were being.

More uses for a washing copper. (or, How to devalue a mountain of gold without even trying.)

When I was looking for more washing copper disasters I found this article. It doesn’t involve an innocent washer woman being set alight or unattended children falling into boiling water. This is a cautionary tale on what not to do with a giant chunk of gold and quartz. The Holterman nugget was found in 1872 and weighed 286kg. It was 1.5m long and contained 57kg of gold. Originally worth £12000, this boiling devalued it by £500.

I was wondering how that much gold managed to not break the bottom out of the copper when it managed to collapse the floor of a hansom cab on the trip to the mint. His copper must have been a stronger version than mine! Having seen photos of this famous nugget I am not sure it would even fit into a copper. 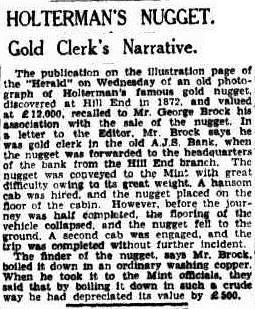 Another example of why kids and explosives don’t mix!

Posted by metan on May 25, 2011
Posted in: old newspapers. Tagged: history, kids. Leave a comment

This article was from 1952 so the chances are pretty good that these little ratbags are still out there. They might even be your parents or grandparents. It would have been quite spectacular to see the entire shop filled with exploding fireworks before it went up in flames and it was amazing that no-one was injured. Kids throwing something like that into a lolly shop containing other fireworks wasn’t too smart though. I mean of all the shops in the town they could have destroyed I am sure there would have been others they would have preferred to do without! 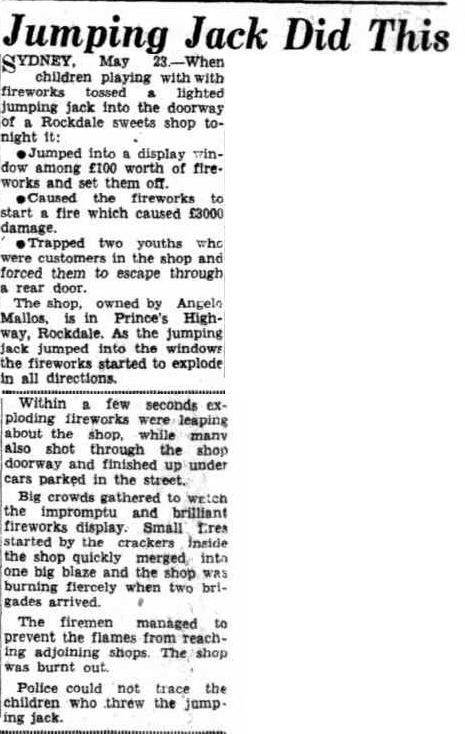