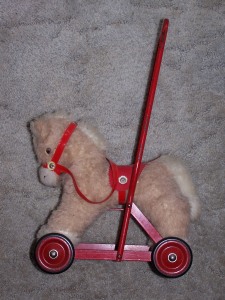 What was your favourite toy when you were a child? Do you still have it? Thanks to my mum I still have many of my old toys. She put them away when I grew old enough to stop caring about them and gave them back to me when I got even older and started caring again. It is so nice to be able to share these things with my own children. They got to teethe on George the green giraffe I did as a child and push Neddy around on his wheels as they learned to walk.

It is also funny to see the difference between the toys now and the types of toys we had back then. Popular toys these days are mainly merchandising. Kids get to act out all of their favourite scenes from movies with the toys from it or they can watch TV shows with their hero recreated in plastic held tightly on their lap.

When we were little there wasn’t anywhere near the same level of merchandising as there is now. I don’t remember having any toys from movies, in fact I remember very few kids movies back then.  Twenty five years ago movies were pretty much an adult thing with token efforts at times for children. Nowadays kid friendly movies are a big slice of the movie-making pie each year. You can see that by the way there are one or two movies released at the end of every school term just in time to get the holiday spending money thrown their way. And what a huge amount of money gets spent. Look at the size of Pixar studios, a company that only makes movies for kids. They have released 11 feature films in 25 years and have made $6.3billion dollars. This is even more amazing when you realize that their target audience has zero earnings and no disposable income.

I wonder if my kids will even remember their movie toys when they grow up. They have had different favourites at different ages and they transfer their affections to a new one very quickly. The funny thing is that their true favourites are not movie toys at all. For many years number 2 son has a bear dressed as a doctor that always makes him feel better when he is sick and number 1 son has a fluffy monster with a twisty tail that has a special place in his heart. These are the toys that I will be putting away for them, not Buzz Lightyear or Spiderman.

Maybe they love these other toys so much because they don’t come with a story. They arrived without a name and without a history and because of that everything they do is their own story. A movie toy can only ever be that character. Yes, they do make up new stories for them and act them out but they know full well that they are playing with a superhero or a space ranger and it is hard to break away from that character. The stories they tell with their other toys are always much more interesting and unexpected.

Number 2 son had a sleepover at school last year and they were instructed to bring a toy to join the party. I noticed the vast majority of the teddies tucked into the sleeping bags were well-loved and battered teddies without a famous name. Of course many of the sleeping bags were Spiderman or Barbie. I think that, in general, kids have a fleeting love for the latest movie/TV hero but the one they rely on when they need to feel secure is the old tried and true teddy. Nice to see that some traditions are never really replaced. Teddy bears have been around for over 100 years and we have all had one. No matter what the next movie hero might be I think kids will always have teddy bears and grown-ups will always remember their old bears with affection. How many of you still wish that old teddy of yours was stuffed safely in a drawer instead of lost forever?